Bryan Fuller on fannibals, creative kills, and season 2 of "Hannibal"

Hollywood TV writer and Clarkston native Bryan Fuller spoke to Entertainment Tonight Online recently about the success of his latest TV thriller, "Hannibal" .    Here's some excerpts from the full interview.

For the show's second season Fuller is planning on a series of guest stars. An invitation has been extended to musician David Bowie. The show is currently in filming. The season will air on NBC in 2014.

ETonline: Your shows tend to attract a very devoted following. What's the fan experience been like for you with Hannibal? Fuller: It's been wonderful and unexpected. I was surprised at the demographic that the show was reaching. A significant portion was young, smart, well-read women; they really responded to this show and I typically relate to young, bright ladies [laughs]. It was nice to see how enthusiastic and passionate they were. And, also, happy in the face of the dark material. They found joy and hope in something that is arguably quite bleak

ETonline: You not only lived with this material before fans did, but also before any actors were cast. How did your perception of Hannibal change after seeing Hugh Dancy, Mads Mikkelsen and the rest of the cast bringing these roles to life? Fuller: As an insecure writer, I'll finish a scene and worry there's a better version of it. Or it could be elevated somehow. It's such a gift to be working with these actors because they take the baton and keep running with it, keep elevating it and keep moving the material beyond my expectations. This really is such a collaborative experience. It helps my neuroses as a writer to know that if I didn't quite nail a scene, the actors will find more levels to play in it. 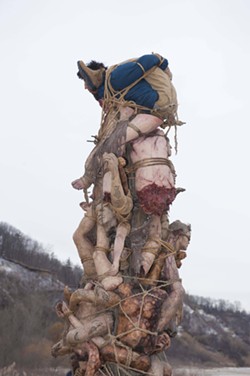 The human totem pole, one of the crime scenes in season one of "Hannibal."

ETonline: We know you love to kill people in creative ways on television, but Hannibal's death tableaus took that to the next level. If you had to pick your favorite kill, which one would it be? Fuller: There are a lot of fun ones. I would say the cello man is pretty cool and the blood eagles were pretty great -- the human totem pole! I got a kick out of that.

ETonline: Given the fact Will's out of action, will the show maintain its killer of the week format? Fuller: We want to maintain the element of a signature kill piece in every episode in some way. Those were things that really helped us focus episodes in terms of storytelling in season one and we don't want to lose that. The first two episodes are a two-parter that has such a grand killer at their core it felt like we needed to spread it out over two hours because what he does is so horrific and huge, we needed to give it time to breathe. After that, we have a killer of some kind every week; whether it's one of our characters or a new case.