Thursday LEWISTON — The 81st annual Lewiston Roundup will run today through Saturday at the Lewiston Roundup grounds, 2100 Tammany Creek Road. Tickets for the weekend are available at www.lewistonroundup.com. Tickets for individual days are $23 for box seats, $20 for reserved seats, $15 for adult general admission and free for kids age 12 and younger. Tickets for all three days are $69. Roundup events include rodeos, “Dancin’ in the Dirt” and a parade downtown at 1:30 p.m. Saturday featuring the Roundup Sweethearts.

Friday CLARKSTON — There will be a 9/11 remembrance event 4:30­-6:30 p.m. Friday at the Clarkston Grange, 2220 Reservoir Road. The event is free. A first-responders procession will pass by the Clarkston Grange on its way through Clarkston. Free hot dogs, ice cream and drinks will be provided. There will be a designated area for people to make signs to hold up to show their support during the parade. 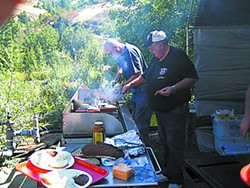 Saturday JULIAETTA — The Juliaetta Blackberry Festival and 14th annual Car Show will be held from 8 a.m.-4 p.m. Saturday at Juliaetta Centennial Park along state Highway 3. Bluegrass band Beargrass will provide live music from 11 a.m.-­4 p.m. The free event features classic cars, tractors and motorcycles as well as food and merchandise vendors. A variety of blackberry items, such as jams and pies, will be for sale. Children’s events include rock painting and crafts. Breakfast items will be for sale from 7­-10:30 a.m., and a barbecue by members of the Juliaetta Fire Department will run from 11 a.m.-3 p.m. for a cost of $7. Car registration begins at 8 a.m., and trophies will be awarded after 3 p.m. Proceeds from the event go to support the Juliaetta Community Center.

Tuesday MOSCOW — The first International Film Series will open at 7 p.m. at the Kenworthy Performing Arts Centre, 508 S. Main St., with the film “Tangerines.” Films selected are from the 2015 Oscar Foreign Film Nominee category and will run on the third Tuesday of each month. Tickets are $5 and can be purchased at the door. “Tangerines” takes place during the 1992-­93 war in Abkhazia in a rural village in Georgia, where Estonian farmers had settled to tend a tangerine orchard. With the start of the war, most of the Estonians who lived in the area returned to their homeland. However, two Estonian men remain in the village in order to harvest the season’s crops and are caught in the crossfire between two small bands of warring soldiers.

Wednesday MOSCOW — A staged reading of “The Gorgon,” written by Zana Previti, will be held at 7:30 p.m. Wednesday through next Saturday at the Forge Theater, 404 Sweet Ave. Additional readings will be held at 2 p.m. Sept. 19-­20. Admission is free for University of Idaho students and $10 for the general public. Previti is a master of fine arts student in the UI Creative Writing program with an emphasis in poetry. “The Gorgon” is her first play and explores the turmoil inside an aging sculptor and those surrounding her. The staged reading features Lauren Finns, David Lenz, Vinecia Coleman, Sky Carlson, Ryan Chidester and Nick Pratt.