PULLMAN — A reception and talk will open an exhibit of prints by contemporary artist Jim Dine at the Washington State University Museum of Art here Oct. 1.

Museum director Chris Bruce will give a talk during the exhibit reception from 6 to 8 tonight in the museum gallery. Dine’s work will be exhibited at the museum through Dec. 12. Admission to the show and related events is free. 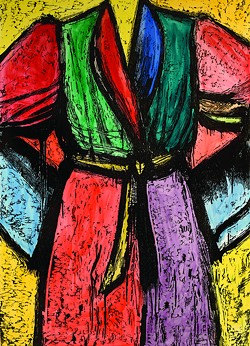 Free screenings of two documentary films about Dine will be at 6 p.m. Oct. 22 in the Compton Union Building auditorium, followed by a 7 p.m. reception in the museum gallery. The films are Academy Award-nominated “Jim Dine: A Self-Portrait on the Walls” and “All About Looking.”

A public evening of poetry/literature readings in the museum gallery surrounded and inspired by the “Jim Dine: A Life in Printmaking” exhibit will be from 5 to 7 p.m. Dec. 10.

Dine, 80, entered the New York art world to great acclaim with his performance art “Happenings” and mixed media assemblages in the late 1950s, according to a news release. The WSU exhibition features works from the entire range of his imagery.

In spring 2014, Dine donated 201 prints from his personal archives to the WSU Museum of Art in honor of art patron Jordan D. Schnitzer. The museum is along Wilson Road across from Martin Stadium in the Fine Arts Center on the WSU Pullman campus. Gallery hours are 10 a.m. to 4 p.m. Monday-Saturday and it stays open until 7 p.m. Thursday.

All lectures in the series are from 7 to 8:30 p.m. in the Johanna Room of the Spirit Center at the Monastery of St. Gertrude, 465 Keuterville Road. They are free and include a Q&A with the presenter. Refreshments are provided.

Other lectures in the series include:

Oct. 8 — “Bound For the Back Country: Volume 2” by Richard Holm, Jr. Oct. 15 — “Frontier History Along Idaho’s Clearwater River” by John Bradbury Oct. 29 — “The Pox, The Flux and Other Maladies” by Steven Branting, Lewiston author and historian

RIGGINS — The annual Salmon River Art Guild Regional Art Show and Sale is Oct. 3 and 4 at the Riggins community Center.

The community center is at 121 S. Lodge St. Admission is free.

Model registration is from 9 to 11 a.m., with the best viewing for attendees from 11 a.m. to 2 p.m. Judging begins at noon, awards presentation is at 2:30 p.m. and a raffle drawing will follow the awards. A silent auction and door prize drawings also will be held.

The show is put on by the Palouse Area Modelers, a chapter of the International Plastic Modelers Society. Admission is $1 per person while children ages 16 and younger are admitted free.

A free “make’n’take” for children will be available with kids invited to choose a model kit, build it with help, if needed, from an experienced modeler and to take the completed model home.

All profits from the show are donated to Christmas for Kids.

The farm is along Animal Science Road, off Terre View Drive, directly behind the Grizzly Bear Center. Attendees should leave pets at home.

The event will feature face painting and games for children, as well as fresh-pressed cider and food, which will be available for purchase by cash or check only.

Pumpkins will be sold by weight from a pumpkin patch that includes traditional jack-o-lanterns, baby pumpkins and novelty varieties.

KENDRICK — The seventh annual Friends of Pat Rush Octoberfest fundraiser will be Oct. 3 at the Veterans of Foreign Wars Hall here.

A beef brisket dinner as well as beer and wine tasting begins at 5:30 p.m., followed by a live auction at 7:30 p.m. Dancing to live music by the 7 Devils from the Lewiston-Clarkston Valley will follow the auction.

Cost is $30 in advance and $35 at the door, and tickets may be purchased at Archie’s Place or Latah Federal Credit Union, both in Kendrick.

The Friends of Pat Rush Medical Assistance Fund is an organization that financially assists Kendrick and Juliaetta residents facing catastrophic medical issues from either a terminal illness or life-threatening injuries caused by an emergency or disease, according to its website.

LEWISTON — Two Northwest authors and columnists, Chris Carlson and Randy Stapilus, will discuss their recent books at a lecture and signing session Oct. 6. It will be at 7 p.m. in the Clearwater Room at the Lewis-Clark State College Williams Conference Center here.

Carlson is a former press secretary for former four-term Idaho governor and Department of the Interior Secretary Cecil D. Andrus, and he served as director of public affairs during Andrus’ term as Interior secretary. He will discuss his latest book, “Eye on the Caribou,” about the critical role Andrus played while Interior secretary in securing passage of President Carter’s act adding more than 100 million acres in Alaska to the system of national parks, wildlife refuges and wilderness.

Carlson also wrote “Idaho’s Greatest Governor” and “Medimont Reflections,” a collection of essays about contemporary issues. He is a columnist for Northwest newspapers, including the Lewiston Tribune.

Stapilus is an author, publisher, a Ridenbaugh Press blogger and author of “The Stuck Pendulum,” a sequel to “Paradox Politics,” a seminal study of Idaho politics. He has covered Idaho and Northwest politics for three decades. He also is author of “Through the Waters,” an oral history of the Snake River Basin adjudication, and “100 Influential Idahoans, 2015.” He lives in Carlton, Ore.