COLFAX — Author Bob Lonn will give a presentation and sign books in two appearances here today for his book “Excitement! Shot At and Missed.”

Lonn will give a presentation featuring stories from the book at noon at the United Methodist Church, 109 S. Mill St., and will sign copies of his book from 3 to 6 p.m. at the Whitman County Library, 102 S. Main St.

The book tells the story of the author’s older brother, Ken Lonn, and his tour of duty in the U.S. Marine Corps during the Korean War. Lonn was born and raised in Colfax, graduating in 1961 from Colfax High School, and now lives in Spokane Valley.

Suzanne Lonn, Bob Lonn’s wife, will join him during the library signing, to sign copies of her novel, “The Game of Hearts.” 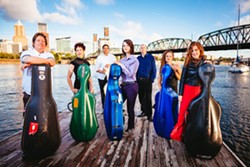 The doors will open at 7 p.m. with entertainment starting at 8. The social hour will include a no-host bar and beer and wine raffle, followed by the stage show with Portland Cello Project. The sixth annual Kenworthy Players Performing Arts Award also will presented.

Tickets for the event are $35 and are available at the Kenworthy.

The band has a repertoire of works by classical and contemporary composers and also will be performing material from their Elliott Smith-inspired release, “to e.s.” This tour will feature five cellists. The group formed in late 2007.

MOSCOW — Kris Dinnison of Spokane, an author of young adult fiction, will read from her new novel, “You and Me and Him,” at 7 p.m. Friday at BookPeople of Moscow. She also will sign copies of her book.

Dinnison spent nearly two decades as a teacher and librarian. When she’s not writing, she helps run her family’s retail and cafe businesses, according to a news release.

Light refreshments will be provided. BookPeople is at 521 S. Main St.

CLARKSTON — RiverFest 2015 will be from 11 a.m. to 6 p.m. Saturday at Granite Lake Park here, Ninth Street and Port Way.

The second annual community event will feature a variety of vendor booths and food booths, games for both children and adult, watercraft and water safety demonstrations, live music and other entertainment. A beer and wine garden will be available for those 21 and older.

The event will feature live and silent auctions, and wine and beer tasting. Proceeds from the event will go toward completing the mezzanine project at the library in Clarkston.

Cost is $35 for three tastings, or $50 for unlimited tastings. Tickets are available online at aclf.brownpapertickets.com, or from any library board member.

UNIONTOWN — The Hog Heaven Big Band returns to Artisans at the Dahmen Barn here with a dance concert from 7:30 to 9:30 p.m. Saturday.

The group of 16 musicians plays regularly in the region, and will feature tunes from the Great American Songbook. Admission is $5 per person.

LEWISTON — Historian and author Steven Branting of Lewiston will give a talk on "The History of Lewiston and the Churches" at 7 p.m. Tuesday at the Episcopal Church of the Nativity here.