Moscow group gains regional recognition for artistic side of woodworking 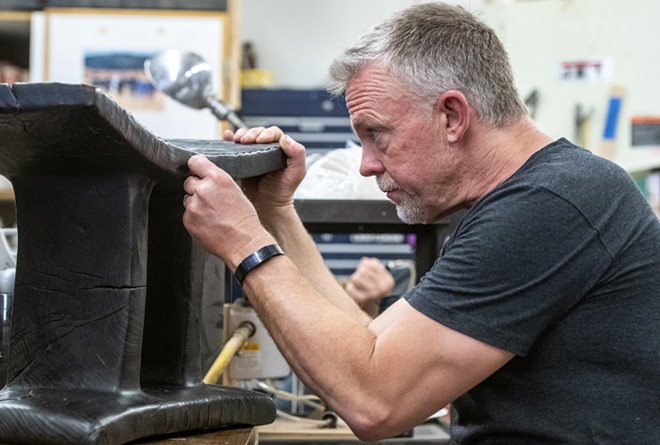 Zach Wilkinson/360
Virgil Aurand observes the grooves on a piece he calls “Elm Bench,” which was carved from a single log and then burned in a traditional Japanese style of preserving wood known as Shou Sugi Ban.


A piece of wood cut by Ben Carpenter into a shape similar to a power pole insulator was the starting point for a lamp that’s part of the exhibit, “Confluence/Influence,” on display at the Art Spirit Gallery in Coeur d’Alene.

Carpenter gave it to another artist, Virgil Aurand, of Clarkia, who made it into a functioning lamp by adding fiber optic filaments which link networks that send cell phone calls and other transmissions in the telecommunications industry.

“It was already weird, so I just went with weird,” Aurand said. “I knew I couldn’t turn it into a salad bowl.”

The men are part of a group known as the Wood Artists of Moscow, which collaborated on many of the pieces in the show. The display is giving a regional audience a chance to see talent that has evolved in Moscow.

The show’s name comes from the method artists followed to make many of the pieces. Similar to how Carpenter and Aurand completed the lamp, one person started a project and then gave it to another, allowing the second person absolute freedom to finish it.

“The concept I wanted to deal with was connections, human contact, supporting others, working together (and) building new relationships,” Moscow-based contemporary artist Jill Kyong said in a statement about the exhibit. Kyong recently joined the Wood Artists of Moscow and brought the group to the attention of the Coeur d’Alene gallery. “The original artist has to give up control and trust the other person to do something great.”

The approach is befitting to Wood Artists of Moscow, which formed to share knowledge, tools and feedback.

Housed in a plain 2,000-square-foot building south of Moscow, the cooperative is owned by four people who invite a select number of artists to work with them in exchange for paying monthly or daily fees. 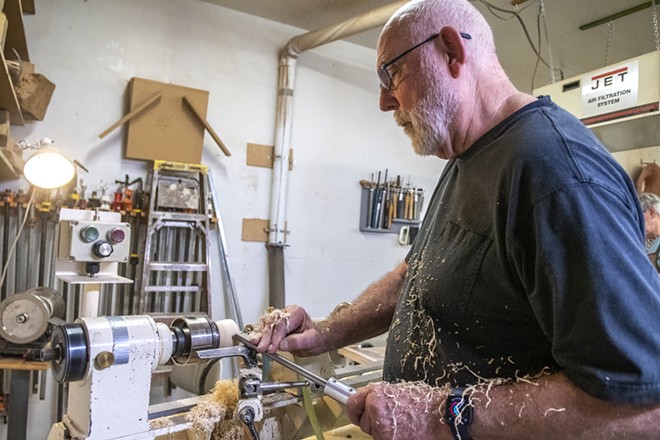 Zach Wilkinson/360
Covered in saw dust, Jim Christiansen makes a wooden bowl using a gouge while turning it on a lathe at the Palouse Woodworkers Collaborative in Moscow.

“It’s more about the community as much as it is the equipment,” said Carpenter, 39, a cooperative owner. “We all learn from each other. We help each other with projects sometimes. We have lunch together. It’s almost like a family.”

Other wood artists find them by word of mouth, and cooperative owners try to weed out people working on more utilitarian projects, like furniture or kitchen remodels, because space is limited.

“They have to contribute to the healthy interaction of the shop,” said Jim Christiansen, 77, the cooperative’s founder.

The cooperative traces its origins to the 1990s, when Christiansen, a principal at Lena Whitmore Elementary School in Moscow, shifted careers and became a full-time wood artist based in his backyard studio.

A rotating group of people began stopping by. Christiansen patiently taught them skills such as carving and woodturning, which involves using a power tool called a lathe. The lathe rotates pieces of wood while people cut them with tools to make objects like bowls and baseball bats.

Carpenter was in high school when he started working at the shop. He’d met Christiansen as a student at Lena Whitmore.

Christiansen never hesitated to take a break from his own work to help him or answer questions, Carpenter said.

“It was kind of like an informal apprenticeship,” Carpenter said. “It was going over to the neighbor’s house and learning how to do this cool craft.”

As a teen, he fashioned fantastical creatures that were crosses between animals and plants.

“You don’t think of wood as being a medium where you can get creative, but it totally is,” he said. 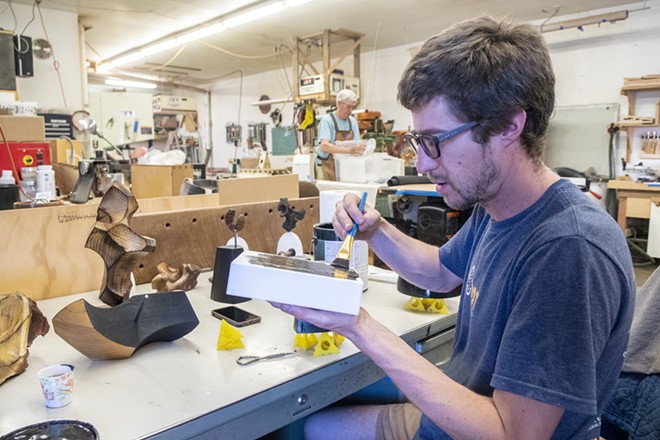 Zach Wilkinson/360
Ben Carpenter applies a coat of paint to a piece he calls “Ax Oxe.” The project involves multiple layers, and Carpenter drilled holes into individual pieces so that they can fit into one another upon presentation.

What he learned at Christiansen’s shop benefited him in a number of ways. One of his works, a vessel with wings attached to it, is in the permanent collection of the Yale University Art Gallery in New Haven, Conn. For 5 years he worked full-time making and selling wooden salad bowls. And, while his art is mostly a hobby now, he earns part of his living in a related field, building furniture.

While mentoring artists like Carpenter, Christiansen did his own work creating objects people find “interesting or beautiful,” he said. “I’ve done fine.”

This all took place in Christiansen’s back yard for nearly two decades, until he reached a crossroads about eight years ago.

Instead of quitting, Christiansen helped found the cooperative and became one of four owners, each with a legal responsibility to cover expenses and an equal say in decisions about operations.

The setting gives those who frequent it the flexibility to develop at their own pace. There’s time to coax surprisingly delicate angles and curves out of wood.

One of Christiansen’s most recent works, titled “Shadow,” is a 22-inch-tall maple vase that’s 3/8ths-of-an-inch thick. The surface is covered with intertwining vines he carved during the past seven months.

“It was a crazy ridiculous project,” he said. “Sometimes we do things that are pretty obsessive.” 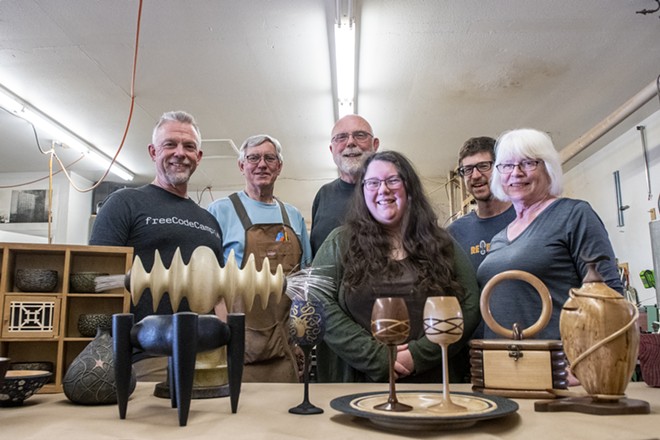 Zach Wilkinson/360
From left: Virgil Aurand, Ed Krumpe, Jim Christiansen, Amelia Trejo, Ben Carpenter and Stephanie Miller pose for a picture in front of a collection of wooden art that they’ve made as members of Palouse Woodworkers Collaborative.

WHAT: “Confluence/Influence” by the Wood Artists of Moscow.

A season of restoration: Father and son bond while restoring classic car during the shutdown