For years, AJ Lane has been putting good food on restaurant tables, and Saturday he’ll show you how you can do the same for your table. 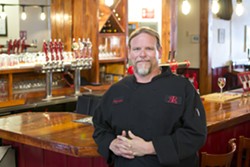 Lane will demonstrate a Vegetarian Palouse Lentil Chili at the Moscow Farmer’s Market as part of the Chefs at the Market program. The dish will showcase Palouse-grown lentils along with vegetables from the market. Samples and recipe cards will be distributed, along with freebies from the USA Dry Pea and Lentil Council.

Lane’s culinary work has long been been appreciated at a number of favorite Palouse restaurants. Most recently, he’s joined creative culinary forces with Neil and Rami Marzolf, who opened Rants and Raves Brewery and Grill in 2016.

We caught up with Lane via email to find out more about his culinary influences, interests and what he’s up to in his kitchen these days:

Culinary background/training: I am a non-papered mutt, as was once told to me, mainly self-taught and guided by many talented chefs over the years. I find working with many different people from around the world over the years has taught me the most.

Past restaurants: The Breakfast Club, Birch and Barley, and Banyans on the Ridge.

Other culinary projects: We are about to open a Rants and Raves taphouse in Riggins. I also consulted with Doug and Christine Lohman for Hardware Brewing Company in Kendrick.

Primary cuisine/ingredients/flavors you specialize in: My passion is Hispanic and Creole food. I had a lot of family and regional influence growing up.

Most popular dish at Rants and Raves: Pub burger on a spent porter grain bun.

Favorite meal to prepare at home: At home my favorite food would definitely be tacos.

Most difficult dish you’ve ever attempted: Last week I processed and smoked a whole hog -- challenging, but fun as well.

Advice for home chefs: Keep it simple. Too many people, including myself, try to overcomplicate recipes. I personally find that sticking to the right balance of your base flavors is always your best bet.

Trick of the trade you use the most: Always be open to others’ ideas.

If you could use only five tools from your kitchen, the would be: My chef's knife,10-inch skillet, food processor, stove and oven. With that I can accomplish most everything.

Favorite specialized kitchen tool: My knife sets, for sure.

WHAT: Chefs at the Market demonstration