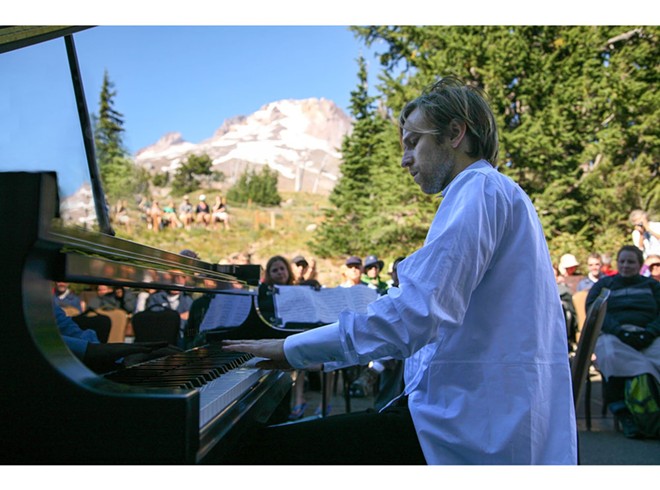 Hunter Noack performs his "In a Landscape: Classical Music in the Wild" concerts at outdoor locations around Oregon and Washington. People can sit and listen or wander the parks wearing headphones. He'll perform this weekend at Chief Timothy Park outside Clarkston.

By Ashley Centers For Inland360

This is not your mother’s silent disco, which embodied bell bottoms and ’70’s music delivered via headphones under flashy lights.

“This project, now only in its second year, is still very much an experiment,” Noack said in an email. “We are taking a nine-foot Steinway and essentially doing pop-up, classical music, silent disco concerts in the wilds of Oregon and Washington. There is nothing like this project anywhere. …I think the reason for this is that these concerts take place in nature. There is something inherently comforting and restorative about being outside.”

Noack will play classical and contemporary piano Saturday at “the listening circle,” a basalt sculpture designed by artist Maya Lin and completed in 2015. Audience members have the choice to either sit and enjoy the music directly in front of Noack and his piano, or they can opt for the provided headphones to enjoy the music as they browse the park. Thus, the music becomes part of the experience of Chief Timothy Park.

The concert is one in a series called “In a Landscape: Classical Music in the Wild,” Noack is performing in 13 outdoor locations around the Northwest.

Using headphones serves a practical purpose, as well as an artistic one. Because Noack’s project has him playing outside, often in the wild, acoustics presented a challenge. Headphones provide a solution to this by isolating the sound, but they also allow audiences to travel the park, finding their own connection between history, ecology and art.

“I love that between pieces I can look away from the piano, out into the woods or across the lake and watch the sunset,” said Noack, a graduate of the San Francisco Conservatory of Music. “I get to be in my favorite places and play my favorite music. What is even better is that I get to travel with an incredibly talented group of people, crew and performers. This project would not be nearly as fun if I didn’t love everyone that I’m traveling with. And then there are the people that we meet along the way. Sometimes we’ll end up at the local watering hole until 2 a.m. talking about fishing holes to check out the next morning or sticking quarters in the juke box. Most of the towns we visit, I think I could just stay on there.” 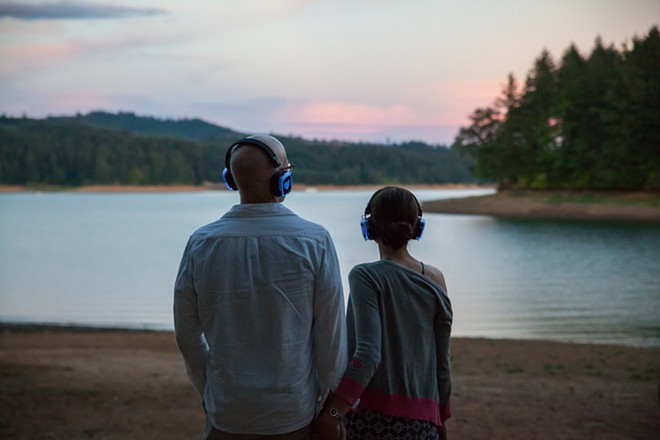 Chief Timothy is eight miles west of Clarkston. The circle is one of five landscape artworks designed by Lin along the Columbia River system for the nonprofit Confluence project. She based her circle design on a 2005 Nez Perce blessing ceremony at the park, which is part of the Nez Perce homeland. Lin is best known for designing the Vietnam Veteran’s Memorial in Washington D.C., considered one of the world’s most influential memorials.

Confluence’s Executive Director Colin Fogarty said the group’s involvement with “In a Landscape” was developed out of a personal connection to Noack. Much of the project relies on creating and forging deeper connections. Each of the six Confluence sites were designed to connect people to the rich history of the Columbia River. The works focus on how it has been shaped and influenced by the native population that has called it home throughout history.

“Confluence is important to me because I believe strongly that we are defined by our history," Fogarty said. " So many people I meet have very little knowledge of the native history and cultures of the Columbia River system. We have seen first-hand that connecting with this more inclusive understanding of our region changes our relationship with the ecology. So much of our understanding of our history boils down to, ‘Lewis and Clark “discovered” this land and the pioneers settled it.’ The reality is much more complex. Art and education can help people connect to this broader understanding.”

COST: Free with a $25 suggested donation. Reservations are required and can be made online at www.hunternoack.com

OF NOTE: People are advised to arrive early and plan for a 20- to 30-minute walk to reach the “listening circle.”