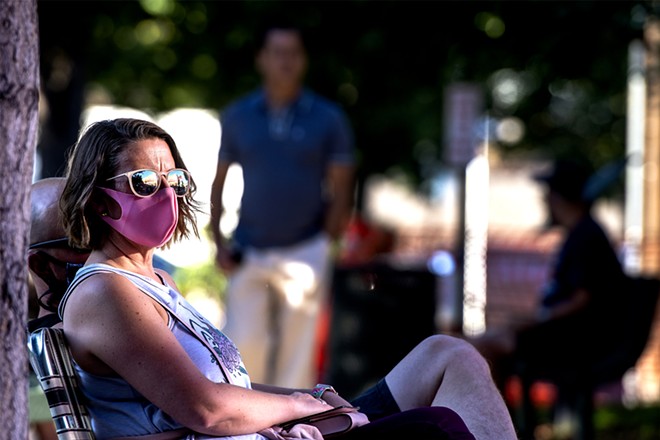 Photo/August Frank
Shawna Pearson wears a mask as she listens to music at Sound Downtown at Brackenbury Square on Friday.

To go or not to go -- it’s a question many people face daily during the pandemic.

For event organizers, the situation is much more complex. Many community organizations depend on gatherings for revenue or to pursue their missions. People continue to plan weddings and other celebrations. With no end to the pandemic in sight, there are no easy answers. Some are canceling everything. Others are taking events online. Some are moving forward cautiously with different ways of gathering in-person.

Moscow’s June Artwalk initially was postponed until fall before ultimately being canceled. Megan Cherry, arts program manager for the City of Moscow, said it wasn’t worth the risk. She has shifted her focus to events that can easily translate to online. Artwalk, based on congregation, did not fit that mold.

People planning an event during the pandemic face two risks as the set date approaches, Cherry said. The first is raising people’s expectations for something that might ultimately need to be canceled. The second is holding the event anyway, with people who attend getting sick.

The decision to cancel artwalk was “not the decision I wanted to make at all … but it’s the right thing to do.”

The Moscow Mayor’s Arts Awards, recognizing community members who contribute to Moscow’s arts and culture scene, will take place online this year, likely without an in-person ceremony. The honors are awarded every two years in October, and Cherry felt like it was important to continue that tradition.

She plans to reopen Moscow City Hall’s Third Street Gallery for an exhibit in early September. A decision on whether or not to hold an artist’s reception has yet to be decided and will depend on the circumstances at the time.

“It’s just really regional approaches,” Cherry said. “We all have to read the tea leaves where we are.”

For now, Lewiston’s Artwalk remains on the calendar for the first weekend in October. Courtney Kramer, executive director of Beautiful Downtown Lewiston, said she can understand Moscow’s decision to cancel its artwalk because of the large returning student population and other factors. For downtown Lewiston businesses, artwalk is a valuable kick-off to the holiday shopping season, she said. She’s working with the city to close Main Street to give people more room to socially distance in the street. She may work with host locations and artists to move art into the street so it’s outdoors.

“We hear from a lot of the restaurants they see good foot traffic on the night we have that event. For those restaurants, especially since they did such a good job pivoting to carry-out, it continues to be a good fit. People can order food and eat it outdoors.”

Kramer is working closely with the health department. She is prepared to take Sound Downtown virtual, if needed, and has informed sponsors of that possibility. If that happened, the show would be livestreamed and archived on a YouTube channel. The performer would still get paid, and the sponsors would be recognized online.

Kramer helped coordinate a webinar last week with the health department called “Planning Community Events in a COVID World” (find story here). One of the topics discussed was masks.

“We can’t enforce (mask wearing), but we can lead by example,” Kramer said. “We set the tone as staff, coordinators and vendors. If we’re all in masks, that visual cue tells the public, visually, what is acceptable.”

Masks are encouraged at Sound Downtown, and the group has ordered disposable masks to distribute. She said she wouldn’t be surprised if organizations begin offering discounts on ticket prices to people who wear masks.

In a few weeks, Kramer will decide whether or not to hold Pumpkin Paloooza, a fall celebration that was scheduled to take place on Halloween this year. It attracts hundreds of costumed children and families who play games for candy and other prizes.

“I’m increasingly becoming uncomfortable with it. It is so tactile,” Kramer said. “The same things we love about it makes it feel dangerous. It brings together kids and grandparents in the same community setting. You hate to cancel an event like that but, as so many of us are seeing, it’s so important our community stays healthy and we’re able to keep businesses open.”