Actors around the region are treading the boards this week, so you can show them appreciation by showing up in the audience. Tell them to “break a leg” but don’t wish them luck. They’re a superstitious lot.

If you’re craving an infusion of Abba music, the Regional Theatre of the Palouse will stage “Mamma Mia!” featuring the hits songs of the pop group, at 7:30 p.m. April 4 at the Pullman theater, 122 N. Grand Ave. 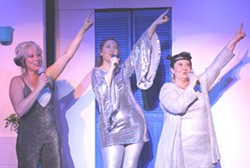 The Regional Theatre of the Palouse will stage "Mama Mia!"

The popular musical, which has spawned a movie and sequel, is directed by John Rich with choreography by Berit Preece.

“Die Mommie Die,” a comic melodrama by Charles Busch, will be staged April 5-7 and 12-14 by the Moscow Community Theatre at Moscow’s Kenworthy Performing Arts Centre.

The comedy evokes 1960s movie thrillers that featured cinema icons like Bette Davis and Joan Crawford, according to a news release.

Admission cost is $15 regular price, and $10 for students and seniors. Tickets may be purchased in advance at Safari Pearl in Moscow, 660 W. Pullman Road.

The Guy-Albion Historical Society’s annual Pie Social will be 6:30 to 8:30 p.m. April 6 at the Albion Community Center.

The fundraising event will feature live music by John McInturf, and pie and Ferdinand’s ice cream will be available for purchase.

Bands include Wanigan, Kevin Pace and the Early Edition, the Potlatch Junior Jammers and Jackie Fox & the Hounds. Admission cost is $5 regular price, and free for ages 15 and younger.

Drivers of horse and mule teams will demonstrate farming the old-fashioned way April 6-7 at the annual Spring Farming Days at the Garfield County Fairgrounds in Pomeroy.

The teams, comprised of about 50 horses and mules, will be plowing and seeding a 12-acre site at the fairgrounds, starting at approximately 9 a.m. each day. The teams will take a break about noon when lunch will be available for purchase, and work will resume in the afternoon.

The buildings of the onsite Eastern Washington Agricultural Museum will be open for tours, and demonstrations will be in action indoors and outdoors. There is no charge to attend.

Dick Southern of Cottonwood, co-author of “They Called This Canyon Home,” will give a presentation based on his book at 2 p.m. April 7 in the Kamiah Welcome Center, 518 Main St.

Southern wrote the book with Susan Turner of Spokane about the Bethmann family and the mansion they had built at Pardee, Idaho. The huge home and small settlement of Pardee no longer exist, but live on in the book.