Heading into a holiday weekend, it’s all about music. Rock, country, bluegrass and a sampling of American composers on horn provides a wide variety of stuff to listen to over this weekend that’s the unofficial end to summer.

The Deltaz, two siblings hailing from Southern California, will make a stop at Artisans at the Dahmen Barn in Uniontown for a concert at 7 p.m. Aug. 30.

Band members are brothers John Siegel on drums and harmonica, and Ted Siegel on guitar, who formed their duo while in high school. They play a wide range of musical genres including blues, rock, classic country and folk, according to their website.

Admission is $15 at the doors, which open at 6 p.m. Food and beverages will be available for purchase.

American composers are highlighted in this concert in the Faculty Artist Series performance at 7:30 p.m. Aug. 30 in Washington State University’s Bryan Hall Theatre on the Pullman campus.

Martin D. King, clinical assistant professor of horn at WSU, will headline the program which also will feature Mark Stevens on piano and Sarah Miller on trombone. Composers featured will include Amir Zaheri, Anthony DiLorenzo and William Grant Still.

Admission is $10 regular price; $5 for non-WSU students, and seniors age 55 and older; and free for WSU students with ID. Proceeds from ticket sales in the series benefit the School of Music Scholarship Fund.

Bryan Hall is at 605 Veterans Way.

The fourth annual Return to Riverside music festival will kick off Aug. 31 with gates opening at 11 a.m. in Potlatch’s Ponderosa Park.

Music begins at noon and continues until dark. The festival lineup includes headliner Junior Brown as well as Jenny Don’t & the Spurs, the Hanson Family, Jessie James, Deep Blue and the Hankers.

Food and beverages will be available for purchase, and a beer garden will be set up.

The park is at 760 Ponderosa Drive.

Foghat, a band originally formed in 1971 London, will bring some guitar-laden rock ’n’ roll to the Clearwater River Casino event center east of Lewiston with a show that starts at 8 p.m. Aug. 31. 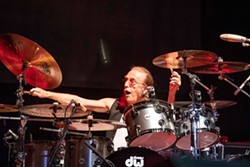 STEVE_REINIS_SandR_IMAGES
Roger Earl plays drums for Foghat during a Pennsylvania concert in May. -- Steve Reinis photo

Members of the 2019 Foghat include Roger Earl on drums (an original member from 1971), Bryan Bassett on guitar, Charlie Huhn on lead vocals and guitar, and Rodney O’Quinn on bass guitar. One of the band’s best-known songs is 1975’s “Slow Ride.”

Tickets are $25 to $50, and available at the casino box office or online at www.ticketswest.com.