The weather may be cold, snowy and on the damp side, so if you’ve had enough outdoors, step inside to catch up with music, films, presentations and exhibits around the region.

The Pacifica Quartet will play at 7:30 p.m. Jan. 23 in the Administration Building auditorium on the Moscow campus of the University of Idaho. The concert is one in the Auditorium Chamber Music Series.

Cost is $25 regular price, $20 for ages 60 and older, $10 for students, and free for ages 12 and younger with a paying adult. Advance tickets may be purchased at BookPeople of Moscow, 521 S. Main St., and online at www.uidaho.edu/class/acms/concerts.

A Smithsonian traveling exhibit focusing on rural America opens Jan. 24 at the Lewis-Clark State College Center for Arts & History in downtown Lewiston, and will include talks and panel discussions throughout the run of the display.

“Crossroads: Change in Rural America” will be on display through Feb. 28 at the center, 415 Main St. The exhibit examines the evolving landscape of rural America and features displays, photos, lectures and readings. 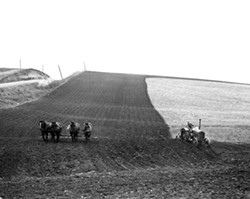 This National Archives photo shows farmers using both a horse-drawn plow and tractor to till a field in Shelby County, Iowa, in 1941. This image is part of the Smithsonian traveling exhibit to be on display at the Lewis-Clark Center for Arts & History in Lewiston.

Special presentations at the center during the exhibit’s run include:
-- 1 p.m. Jan. 25 — An opening celebration for the exhibit will feature “The Crossroads as Witness: Hope, Silence and the Rural Ideal,” a lecture by Rochelle Johnson, a state scholar for the Idaho Humanities Council and the Crossroads Exhibit.
-- 7 p.m. Jan. 29 — Readings about rural life by LCSC students and faculty, including author Claire Davis, and by Moscow author Kim Barnes, who will give a reading from her novel in progress, “Salvo.”
A series of panel discussions also is planned during the exhibit, all held at the Lewiston City Library, 411 D St. They include:
-- 4:30 p.m. Feb. 5 — “What happened to ‘Company Towns’? — Changes in Rural Commerce and Industry.”
-- 4:30 p.m. Feb. 19 — “Farms & Agriculture – Was Daniel Webster Right When He said Farmers are the Founders of Human Civilization?”
-- 1 p.m. Feb. 22 — “Crossroads of our Region: Rivers, Rails & Roads, our Transportation Story.”
-- A concluding celebration of regional cultural heritage will be from 3-5 p.m. Feb. 22 at the center.

The exhibit is part of the Smithsonian’s “Museum on Main Street” program, developed to bring exhibitions primarily to smaller communities in America that would not ordinarily have the opportunity to host such an exhibit, according to a news release. The Center for Arts & History was chosen as one of six host sites in Idaho through an application process with the Idaho Humanities Council.

The 17th annual Wild & Scenic Film Festival, a series of 13 environmental short films, will be shown at 7 p.m. Jan. 24 at the Kenworthy Performing Arts Centre in Moscow.

Doors open at 6 p.m., and the event also will include a drawing and no-host bar.

Advance tickets are $10 and may be purchased online at www.sierraclub.org/idaho. Tickets will cost $15 at the door, 508 S. Main St.

Cantiamo, the Washington State University faculty vocal ensemble, will give a concert titled “A Triangle of Love: Robert, Clara and Johannes” at 7:30 p.m. Jan. 24 in Bryan Hall Theatre on the Pullman campus.

The concert, part of the Faculty Artist Series, will celebrate the love and friendship between the Romantic-era composers Robert and Clara Schumann with Johannes Brahms, according to a news release. Cantiamo members are Julie Anne Wieck (soprano), Lori Wiest (mezzo-soprano), Christopher Nakielski (tenor) and Aaron Agulay (baritone). They will be joined by Elena Panchenko and Catherine Anderson on piano.

Cost is $10 regular price, $5 for non-WSU students and seniors age 55 and older, and free for WSU students. Proceeds benefit the WSU School of Music Scholarship Fund.

A presentation about frontiersman and trapper William Craig will be given from 1-2 p.m. Jan. 25 at the Nez Perce National Historical Park’s Spalding Visitor Center.

Lin Tull Cannell of Orofino will present “Vignettes and Backstories: The Intermediary: William Craig Among the Nez Perces,” which includes photographs of people and landscapes from Craig’s life.

Historian Rebecca Mead will give a presentation about women’s suffrage beginning at 7 p.m. Jan. 28 at the Kenworthy Performing Arts Centre in Moscow.

Mead’s presentation, “How the Vote was Won: Women’s Suffrage in the U.S. West,” will look at the factors that resulted in nearly all women in the West being granted the right to vote by 1914, while few women in the eastern United States voted until after the ratification of the 19th Amendment in 1920, according to a news release.

Mead is associate professor of history at Northern Michigan University in Marquette, and is recognized as an expert on women’s suffrage in the West.

The lecture is part of the “Seeking Suffrage Lecture Series,” a yearlong commemoration of the 100th anniversary of the ratification of the 19th amendment.

The annual Backcountry Film Festival, a fundraiser, begins at 7 p.m. Jan. 29 at the Kenworthy Performing Arts Centre in Moscow.

Cost is $10, and all proceeds will benefit the nonprofit Wallowa Avalanche Center based in Joseph, Ore. Payment in cash or check only will be accepted.