There’s an event-filled week coming up in these parts. If you can’t find something to pique your interest, you might need to broaden your interests.

The sisters make their return to thank their supporters in “Nunsense II: The Second Coming,” staged by the Washington State University School of Music at 8 p.m. July 27-29 in Pullman.

The production will be staged in the Bryan Hall Theatre on campus. 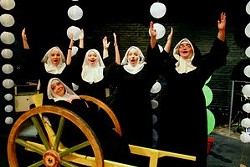 The cast from “Nunsense II: The Second Coming: sings “We're the Nuns to Come to When You Go.” Lori Wiest, as the Reverend Mother is sitting; standing (from left) are sisters Kristina Gaumnitz, Leticia Monteiro, Katie Berndt and Anya Guadamuz.

The sequel takes place six weeks after the nuns have held their first benefit, returning to the theater to produced a “thank you” to all the people who have supported their past efforts. In this comedic musical, the sisters get bitten by the theater bug, try to impress a talent scout in the audience and try to keep Sister Mary Amnesia from being taken away by Franciscans, according to the play’s website.

Tickets will be available at the door 90 minutes before each performance. The cost is $10 for students and senior citizens, and $15 for general admission.

The daylong Palouse Music Festival July 28 will feature seven musical acts, along with crafts and food vendors, at Hayton-Greene Park in Palouse.

The event also will include family friendly activities, and organizers suggest attendees bring lawn chairs for seating. Paradise Creek Brewery and the Palouse Community Center will sponsor a beer garden.

“Where Athlete Power Meets Horsepower” is the theme of the seventh annual Special Olympics Summer Show and Shine from 10 a.m. to 2 p.m. July 28 at Lewiston’s Locomotive Park at the bottom of 21st Street.

Registration for entries is from 8 to 10 a.m., and vehicle entry fee is a $20 suggested donation. Food will be available for purchase, and the awards presentation begins at 2 p.m.

Proceeds will go to the Lewis-Clark Special Olympics. The park is at 2102 Main St.

The Cherry Sisters Revival will bring its mix of old-time folk and country music to their 7 p.m. concert July 28 at Artisans at the Dahmen Barn in Uniontown.

The concert is the fourth in the Dahmen’s summer concert series.

Based in Moscow and Pullman, the three-woman group bills itself as a “silly string band of ukuleles, a banjo, percussion and vocals.” Members are Tracie Brelsford, Connie Steiger and Shelly Gilmore.

Admission is $15 at the door. Food, wine and beer will be available for purchase.

A music and craft brewing festival aimed at raising money for two nonprofit organizations will kick off at 4 p.m. July 28 at the Latah County Fairgrounds in Moscow.

The free, family friendly event also will feature activities for children provided by the Idaho National Guard. Vendors will have food and beverages for sale at the event which continues until 10 p.m.

Attendees who are 21 and older may purchase $15 tickets at the gate for the craft brewing event, which will include a commemorative pint glass and four drink tokens. Additional tokens may be purchased.

The fairgrounds are at 1021 Harold St.

There are a variety of ways to cool off in summer’s heat, but ice cream remains a favorite. Grab a cold dish of deliciousness at the 43rd annual Latah County Historical Society Ice Cream Social, set for 1 to 4 p.m. July 29 on the McConnell Mansion lawn in Moscow.

In addition to ice cream sundaes and watermelon, the free afternoon event will include children’s games, activities and dress-up. Members of the Appaloosa Lace Makers, Hog Heaven Muzzleloaders and Palouse Weavers Guild will give demonstrations, and Henry C. and the Willards will provide live music.