Whether you’re hungry for burgers or ice cream or tiny food (to go with the tiny art), there’s something on this week’s menu to please almost everyone.

A “Tiny Art Show” featuring more than 200 miniature pieces of art by more than 100 artists opens the evening of June 20 at Moscow’s 1912 Center. 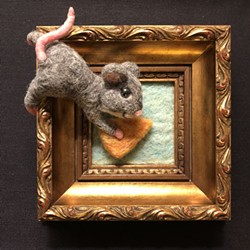 The opening reception will be from 5 to 7 p.m. at the center, 412 E. Third St., and magnifying glasses will be provided for viewing the works. It will feature tiny quiches, micro-greens salad with baby carrots, brownie bites and microbrews.

All the works are for sale by sealed bid as a fundraiser with money raised to go toward the renovation of the center’s second floor, which will be open for tours during the reception. The exhibit will conclude Aug. 26 when the winning bidders will be announced.

The Southwick Community Center’s annual Barbecue Fundraiser kicks off at 5 p.m. June 22 at the center in this small Nez Perce County town east of Kendrick.

Proceeds from the fundraiser, which continues until 9 p.m., will go toward maintenance and improvements at the center. Cost is $12 regular price and $5 for children ages 10 and younger.

The community center is at 39863 Southwick Road.

Tone Sober, a rock band from Colfax, will play a concert at 7 p.m. June 22 at Artisans at the Dahmen Barn in Uniontown.

Food and beverages will be available for purchase at this second in the Summer Concert series at the barn. Doors open at 6 p.m., and cost is $15.

Costumes are encouraged for this event which features two distances, 1 mile or a 5K. The race is sponsored by Homes of Hope with proceeds to benefit foster children in this region.

Check-in on race day begins at 8 a.m., and those wishing to register online may do so at www.raceentry.com/capes-n-crowns/race-information

The annual Swedish Midsummer Celebration will begin at 1 p.m. June 23 at the historic Cordelia Church in Latah County between Genesee and Moscow.

The Friends of Cordelia organize the celebration which will include Swedish foods and live music by the Old Time Fiddlers beginning at 2 p.m.

The church is at 1501 Danielson Road.

The 46th annual Perkins House Ice Cream Social, a fundraiser to benefit the Whitman County Historical Society, will be 1 to 4 p.m. June 23 at the Perkins House in Colfax.

The two-story Victorian house, completed in 1887, was the home of James Allen Perkins, one of the pioneers of Colfax. The historical society purchased it in 1973, and the house is open for tours during the fundraiser.