LEWISTON — The Lewiston High School drama program’s production of the stage adaption of the musical film “Footloose” opens March 2 in the LHS auditorium.

Curtain time is 7 p.m. each night of the production, which also will be staged March 3-4 and March 9-11. The show is rated PG and runs approximately 120 minutes long with an intermission.

Marshall Fisher portrays Ren McCormack, the high school youth who moves to a small town that has banned dancing, so he schemes to have a real senior prom. Included in the cast of more than 40 is Shantell Larson as Ariel.

The production is directed by Mel Syverson, LHS drama adviser.

Admission is $6 regular price, $4 for seniors and students, $2 for students and teachers from LHS, Tammany Alternative Center and Clarkston High School. Children age 3 and younger are admitted for free.

MOSCOW — The LunaFest Women’s Film Festival kicks off at 6:30 p.m. March 2 with a pre-show reception at the Kenworthy Performing Arts Centre here.

The national film festival showcases original short films by and about women. They range from documentaries to animated shorts.

During the reception, complimentary hors d’oeuvres will be served and drinks will be available for purchase.

Films start at 7:30 p.m., and a drawing for donated prizes will be held during intermission.

Proceeds will benefit the Breast Cancer Fund and the University of Idaho Women’s Center in Moscow.

The gala concert featuring “Jazz Concerto for Piano and Orchestra” by Gregory Yasinitsky, director of the WSU school of music, begins at 7:30 p.m. March 2 in the Bryan Hall Theatre. Soloist will be Willis Delony, distinguished professor at Louisiana State University, performing with the WSU Symphony Orchestra under the direction of Danh Pham.

Two concerts March 3 include an electroacoustic concert from 3 to 4 p.m. featuring works by visiting composers in Kimbrough Concert Hall and the Post Haste Reed Duo at 7:30 p.m. in Bryan Hall Theatre.

March 4, solo and chamber music performances will be at 1 p.m. in Kimbrough Concert Hall and 7:30 p.m. in Bryan Hall Theatre.

MOSCOW — “Life with Linda,” an exhibit featuring works from Moscowan Linda Pall’s personal art collection, opens with a reception from 5 to 7 p.m. March 3 in the Third Street Gallery here.

The reception will coincide with Pall’s birthday.

Pall has worked as a lawyer in Moscow for many years, and has long been active in Moscow community activities and politics. She has served multiple terms on the Moscow City Council and, in 2012, the plaza at the city’s 1912 Center was named in her honor.

“I was delighted that the city asked me to exhibit parts of my art collection that I have gathered over the years.  I have always thought that it is almost as important to be a patron of the arts as it is to be an artist,” Pall said in a news release.

Items in the exhibit will include a variety of Pall’s acquisitions beginning in the mid-1960s when she was a college student and continuing through items picked up on her travels, commissioned works and prints and works in fiber. The exhibit also will feature some autobiographical information about Pall, and her interest in the visual arts.

The exhibit continues through April 5.

MOSCOW — The University of Idaho Theatre Arts production of “Dead Man’s Cell Phone” will open March 3 at the Forge Theater on campus here. The comedy, written by Sarah Ruhl, begins at 7:30 p.m. March 3-4 and 2 p.m. March 5.

The production is directed by Lauren Hirsch, a Bachelor of Fine Arts candidate in the Department of Theatre Arts, with a cast of students from the College of Letters, Arts and Social Sciences: Cesar Reyes, Tiffanie Moore, Cesar Garcia, Kylee Teal, Elizabeth Diaz and Cami Nichols.

Tickets are available at the door 30 minutes before curtain and cost $10. Admission is free for UI students.

PULLMAN — Wildlife is the subject of the next Family Science Saturday from 11 a.m. to 2 p.m. March 4 at the Palouse Discovery Science Center here.

Members of the Wildlife Society of Washington State University will be on hand for “In the Wild” to lead children through a variety of activities including animal identification, wildlife safety, games and face painting.

UNIONTOWN — Wildlife photographs and wood carvings go on exhibit this month at Artisans at the Dahmen Barn here. An opening reception is 1 to 3 p.m. March 5. 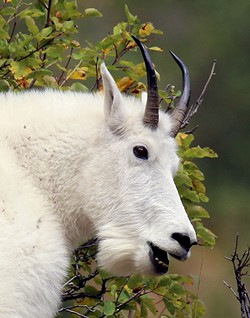 This photo of a mountain goat by Charlie Wheeler of Potlatch will be included in an exhibit at Artisans at the Dahmen Barn in Uniontown.

Charlie Wheeler of Potlatch will exhibit his wildlife photography, including Northwest birds and mammals printed on canvas, metal and paper. Wheeler won first place in the Bird and Mammal division in the 2016 Palouse Chapter of the National Audubon Society photo contest.

The exhibit has no admission fee and continues through March 26. Hours at the barn are 10 a.m. to 6 p.m. Thursday through Sunday. It is at 419 N. Park Way.

UNIONTOWN — Any chance you can guess what’s on the menu at the 64th annual Uniontown Sausage Feed?

You got it: all-you-can-eat sausage is the entree served from 10 a.m. to 5 p.m. March 5 in the Uniontown Community Building here, along U.S. Highway 195.

Alongside the sausage, attendees will get mashed potatoes, sauerkraut, green beans, applesauce, rolls, pie and beverage.

A beer garden will be available for the over-21 crowd and a barbershop quartet, 4 Names in a Hat, will provide live music to dine by.