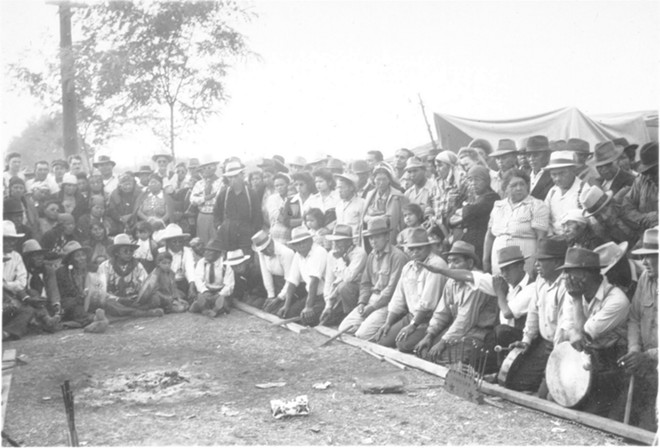 Members of Columbia River tribes gathered at Celilo for centuries before the ancient village was inundated by creation of The Dalles Dam. The photo is on display in "Dams.Fish.Controversy," which provides a multi-tribal perspective of life before and after the dams.

Update 9:40 a.m. May 16: Due to a last minute cancellation,  Josiah Pinkham of the Nez Perce Tribe will speak at Thursday's Story Gathering instead of Carol Craig. This story was updated to reflect that change.

The exhibit “Dams.Fish.Controversy” offers a perspective from people who have lived along the Columbia River and its tributaries for thousands of years. Starting tonight, people can hear some of their voices in a series of talks accompanying the exhibit.

The series begins with the Confluence Project Story Gathering, which will feature Josiah Pinkham of the Nez Perce Tribe; Roberta Conner, director of Tamástslikt Cultural Institute in Pendleton; and Silas Whitman, former chairman of the Nez Perce Tribal Executive Committee.

The story gathering is organized in part by the Confluence Project, best known for its series of artworks along the Columbia River, among them Maya Lin’s “Listening Circle” at Chief Timothy Park outside Clarkston.

The Confluence Project began during the Lewis-Clark Expedition bicentennial with the aim of sharing another perspective about the expedition -- that of American Indian nations along the Columbia River and its tributaries, said Colin Fogarty, the project’s executive director. The project’s mission of connecting people to the history, living culture and ecology of the Columbia River system through native voices continues.

“Native voices have been marginalized or ignored for hundreds of years. We feel it’s high time to elevate their voices and perspective,” Fogarty said. “The story you often hear about native people is one of loss. … What we heard from native elders and others is that the story is about resilience as much as anything else. They’re still here.”

The “Listening Circle” was built to honor the Nez Perce people, but it’s called a listening circle deliberately to call attention and to honor the tradition of listening,” he said.

“The Story Gathering, in a way, is a manifestation of listening, listening is just as important. Of course it’s a discussion, but listening is something we could all do a lot more of.”

The free event is at 5:30 p.m. Thursday, May 16 at the Lewis-Clark Center for Arts & History in Lewiston.