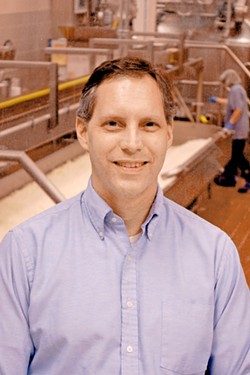 A new kind of gold rush has come to the Inland Northwest and this time the prize does not come from the mountains and rivers but from the Washington State University Creamery.

The secret is out about the cheese from Pullman. The Cougar Gold rush is here. Bon Appetit, a New York City-based food and entertainment magazine, published an article online Jan. 14 by Jessica Kelly titled “I’m Here to Highly Recommend Canned Cheese.”

The cheese in question is none other than Cougar Gold and the high recommendation didn’t go unnoticed.

Orders for cheese have increased, said John Haugen, WSU Creamery manager. A usual January will have 200 orders a day. After the article, orders rose 400 to 500 orders a day. All the orders were cleared out by Friday afternoon but then Haugen said more than 1,000 new requests came in from across the country.

“It’s the most measurable response I’ve seen that I can remember,” Haugen said.

It’s not the first time that word of the cheese reached a wide audience. Haugen said that sales jump once every year or so because of some kind of large media presence.

“It’s always out of the blue, you can’t predict it.”

Between 1999 and 2000, the Food Network visited the creamery for a story. The piece aired at different times throughout the year, and every time it did there was a jump in sales.

“The internet was still new, so the call center would get hit with orders,” Haugen said.

This time around, the internet played a role in sales growth, partly because the article links to the WSU Creamery website so people can place their orders directly with the university. According to statistics from David Dean, who does direct marketing for the creamery, 30 to 35 customers logged in per day from November to December, Haugen said. Since the Bon Appetit story ran, that number jumped to 50 to 60 a day, and once even more than 100.

The rush caused more work for creamery employees, but Haugen is thankful it didn’t coincide with the holiday rush.

“We’ve had an overwhelming response,” said Haugen. “It’s been a challenge for the staff.”

Part of the difficulty is because of the pandemic.

“Providing a practical work experience is a big part of why we’re in business,” said Haugen.

There is usually a rush of orders during the holiday season, and two years ago the creamery increased production of its cheeses in anticipation of the annual demand. Cougar Gold takes one year to mature, and 2020 marked the first year that the extra production supply was ready. Even with the combination of the holiday sales and the surge from the article, there was enough cheese to go around.

Financially, the sales boom worked well because it helped offset the decrease in over-the-counter cheese and ice cream sales caused by pandemic closures and decreased traffic because audiences weren’t allowed at football games.

“We made up for it in online sales,” said Haugen. “It all balanced out for us.”

It also helps that the cheese tastes good.

The Bon Appetit review author described Cougar Gold in glowing terms: “it started to melt a bit, creating a creamy, silky texture, with a nice sharpness to it. It was one of the best cheddars I’d ever had.”

Haugen said that taste comes from the aging of the cheddar.

“People who like sharp cheese say it gets better with age,” he said.

Haugen explains there is a reason for the can. The cheese was developed by WSU dairy professor Norman Golding (for whom Cougar Gold is named) in the 1940s, with the help of the U.S. Army and the American Can Company. The cheese, when sent to troops preserved in wax, would arrive moldy. The solution was to put it in a can, and Golding added an additional culture to the cheese, which also gives it the distinct Cougar Gold flavor.

Over the years, plastic became the preferred method to keep cheese fresh, but Cougar Gold, being a niche product, kept the can.

“It’s an iconic thing; people recognize it when they see it,” Haugen said.

As the Cougar Gold rush continues, that iconic look and legendary taste will continue to spread to cheese lovers across the nation, sharing a little piece of Pullman with it.