Documentary examines dams' role in decline of orcas and salmon 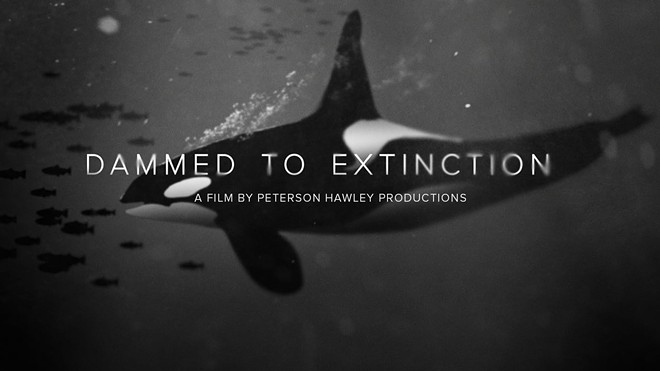 As two species swim toward extinction in the Pacific Northwest, writer Steven Hawley is telling their story in an attempt to clear a way for their survival.

Hawley’s new documentary, “Dammed to Extinction,” screening Monday in Moscow, tells the story of a distinct population of orcas that have hunted chinook salmon along the Pacific Coast for eons. Now numbering 73, they feed at the mouth of the Columbia River and need roughly a million fish a year to survive. They are starving as fewer and fewer salmon return each year from their native streams in the mountains of Idaho, Washington and Oregon, said Hawley, a journalist and author based in Hood River, Ore.

“There used to be 5 to 10 million chinook salmon every year that would come back to the Columbia,” he said. “We’re down to less than 1 percent of that.”

The film explores the role the four federal Snake River dams have played in both species’ decline, along with what removing the dams would look like and could mean for their survival.

“We need to acknowledge, as scientists point out, that the surest route to recovery for both is removal of the four, no longer needed, dams,” said Hawley, who wrote and produced the documentary with filmmaker Michael Peterson.

The film is based on Hawley’s 2011 book “Recovering a Lost River,” in which he documented the decline of salmon in the Snake and its wilderness tributaries. The book challenged the notion that the hydropower that the dams provide is a cheap and green source of energy, something the film also explores.

“Even if you’re not a huge fan of orcas and salmon, there are changes in the energy market in the West,” he said. “Solar, wind and, for now, natural gas are cheaper than hydropower.”

Continued reliance on the dams for power could mean being “stuck in a future with not only no salmon or whales, but some of the most expensive electricity in the country,” he said.

Those in favor of keeping the dams argue there are many factors at play in the decline of the salmon and orcas, including rising ocean temperatures brought on by climate change. Hawley argues that the dams are the biggest factor in the species’ decline and one that we can actually control.

“While it wouldn’t solve all the orcas’ problems, it would be a step in the right direction,” he said.

He called the claim that rising ocean temperatures are to blame “interesting,” when one looks at temperature averages in reservoirs behind the dams.

The film premiered in the spring, and Hawley has since shown it around the Northwest where removing the dams is a hot-button issue. While he has expected controversy at the showings, he has encountered little so far, he said. At a recent showing in Spokane, the vast majority of the audience was in “rabid” favor of removing the dams, he said.

He calls the region around the Palouse ground zero for the issue.

“If we’re going to change the direction of salmon recovery and the future of orcas, it’s going to take the goodwill of the people in eastern Washington and Idaho,” he said.

Hawley will lead a discussion session after Monday’s screening at the Kenworthy. “Dammed to Extinction” includes interviews with scientists, experts and others from around the Northwest. Among them is Linwood Laughy of Moscow, environmental researcher and Advocates for the West board chairman; former 40-year Idaho Fish and Game fish biologist Steve Pettit of Juliaetta; and longtime backcountry pilot and conservationist Dick Walker of Peck.

The film is scheduled to be shown at the Wildlife Conservation Film Festival in New York in October. Its Moscow screening was organized by the Unitarian Universalist Church of the Palouse Environmental Task Force, Palouse Great Old Broads for Wilderness, Palouse Environmental Sustainability Coalition, Friends of the Clearwater and Nimiipuu Protecting the Environment.

WHAT: Documentary film “Dammed to Extinction.”