What would you do if you were president? What should we do about immigration? What do people need to live a better, happier life? These are a few questions Inland 360 asked a group of area children before election day.

While we may not all agree on who should be the next president we can probably all concur it’s been a long, ugly and exasperating election year.

By now people’s opinions have boiled down to the scorched bottom of the pan. Most minds are set. After Tuesday, it will be time to move forward — regardless of hurt feelings and wounded egos. With that in mind, Inland 360 turned to area children for a fresh look at politics. Sometimes kids can show us our hardened opinions in a new light.

Inland 360 visited with a group of children at the Boys & Girls Clubs of the Lewis-Clark Valley Lewiston Branch. We asked them about the nation’s most pressing concerns and what they would do if they were president — if they would want to take on the job.

What would you do if you were president? 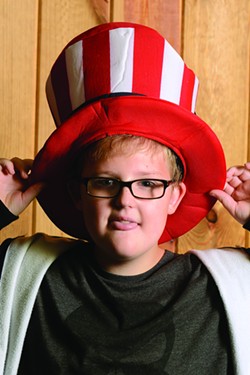 “Number one, I’d build a bigger police force to save the refugees from terrorists in other countries. Two, I’d build more homeless shelters that people could live in as long as they want. Three, I’d make a Christmas program where people donate gifts and every country could give those gifts to the homeless.” — Ryan Lerche, 9

“If I was president I would make sure everybody has a good education at schools and we’re well supported and make sure everyone is doing well in every state. That’s pretty much it.” — Kaitlyn Bynum, 9

“I would be nice to all the people in the whole world.” — Tyler Lerche, 5

with it — like if we’re still having problems with Russia, I would just talk to them. I wouldn’t want war. Maybe we’d sign a peace treaty.” — Trinydee Pope, 10

“For one, I would try to decrease the tax on a lot of different things and try to open more jobs. And I’d increase the minimum wage.” — Ayden Diaz, 11

“I recently took a trip to Seattle and saw a lot of homeless people. I would make more opportunities or jobs so they could get back up on their feet; and open more homeless shelters.” — Cayenne Moore, 14

What do you think is the biggest problem in our country? 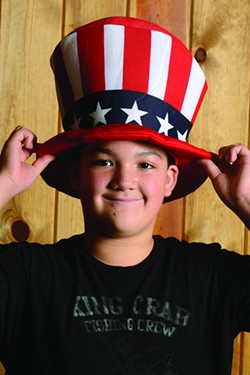 “People are being mean and hurting others — and I’m guessing that’s why Hillary wants to take away gun rights, but I think kids only do it because parents didn’t care about what the kids did.” — Trinydee Pope, 10

“Not enough jobs. My friend’s parents recently got fired and they’re having trouble finding a job so it’s definitely something people struggle with.” — Cayenne Moore, 14

“Pollution is one. I’d have a team of workers build tiny trash cans for people to put to use. Other problems, terrorists are a big threat. I’d lower taxes instead of raising them.” — Ryan Lerche, 9

— “I would try to find a way to see if we could get rid of cancer … any type of cancer. … One of my suggestions is don’t smoke and make sure you’re healthy.” — Kaitlyn Bynum, 9

What do you think we should do about immigration?

“Some people say it could make it so bad people come in, but we should make sure if they’re good people who are coming with good intentions. We could check references, or like Hillary said in the debate, make them go to college or work in the military. There could be bad people trying to

get in but there could be good people just looking for a better life.” — Ayden Diaz, 11

“We should tell them that you guys can come to our country.” — Tyler Lerche, 5

“I think it would be OK (for people from other countries to come here) but they have to not bring diseases and they have to go through this thing to show they do not have guns and I think we should have barbed wire around the U.S., maybe. Not a brick wall, like Trump said in the

debate, but something that opens and closes and has lots of different keys. ... I just want a gateway.” — Kaitlyn Bynum. 9

What is something that should change about our country?

“People have to pay taxes and us having to pay more money is a problem. Like when we go to McDonalds and order, we have to pay a whole extra dollar — I snuck and looked. They should be a little lower, like five cents.” — Trinydee Pope, 10

What is something that would make Americans have a better, happier life?

“(A higher) minimum wage could help with money. A lot of people don’t have enough money. They might live in a nice apartment, but they’re having a hard time trying to get something to eat.” — Ayden Diaz, 11

“We could take sticky notes and write nice things to people to start off the day. Being kind can make a big difference in life.” — Trinydee Pope, 10

“I’d probably add more TV channels so people could watch their favorite shows. And have implants from phones to turn on things in your house, like control the TV, the lights.” — Ryan Lerche, 5

“A great family, a great life, a great education, so you can grow up to be a good parent.” — Kaitlyn Bynum, 9

“Surround themselves with people who love them for who they are.” — Cayenne Moore, 14

What do you think our next president should be like?

“If people are hurt and they’re crying then you help them up.” — Tyler Lerche, 5

“Kind. Donald Trump said women are un-right for president but I really want Hillary to be president. She’s nice, she’s not going to put up the wall, she wants the wall down.” — Lucas Bynum, 7

“I think what’s good is knowing what the people say and agreeing with the people, not just doing things that he wants.” —Trinydee Pope, 10

What should we do to make it so everyone has enough money?

“Fundraisers. There could also be little banks that have food where people can get food.” — Lucas Bynum, 7

Would you want to be president?

“I don’t know. Being it for a long time and facing all those problems? But if my country needed me, I’d do it. I would definitely change taxes. And I would maybe, if I could, I would try to stop war and bombs. Because my dad always has to go to Afghanistan and has to fight and train.” — Trinydee Pope, 10

“No. … Because a lot of people depend on you. It’s like a ginormous family that needs to be taken care of.” — Cayenne Moore, 14