Exhibit tells the before-and-after story of the Columbia River dams, according to the tribes 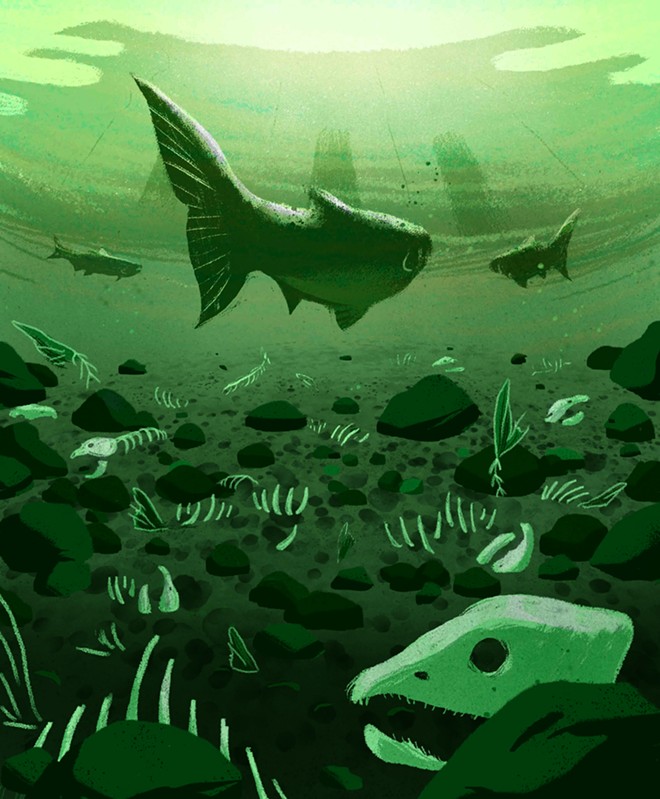 Mention “dams and fish” at a gathering in the Pacific Northwest and you’ll likely find yourself in the crossfire of opinions flying like bullets.

A new exhibit at the Lewis-Clark Center for Arts & History offers what could be considered the original perspective, that of the people living along the 1,243 mile Columbia River and its branches for thousands of years.

“Dams.Fish.Controversy,” is a multi-tribal perspective on the Columbia River dams. You won’t find facts and figures about hydropower, fish mortality rates or river transportation. Instead, you may find a different view of how history unfolded, along with the story behind tribal efforts to restore nature’s balance. As one placard explains, “the salmon are the miner’s canary to the tribes.”

“It’s a specific perspective and so there are other perspectives,” said Kelsey Grafton, exhibit curator.

Photos and narrative explanations on display originally came from two separate exhibits, one developed by the Josephy Center for Arts & Culture in Joseph, Ore., and the other by the Tamástslikt Cultural Institute in Pendleton. They present a shared history amongst the interconnected tribes.

According to tribal teachings explained in the exhibit, many thousands of years ago the land spoke a promise to always care for the “natitalwt,” the first people. In exchange, the people promised to care for the land. This teaching is the original law, “tamalwit,” and is considered to be inseparable from the water and foods of the region. This belief formed the backbone of treaty protections that established tribal citizens’ inherent right to hunt, fish and gather from the land they’ve always known.

Archaeology confirms ancestors of Plateau Indians living around Oregon’s Celilo Falls on the Columbia more than 10,000 years ago. Celilo was one of the largest trading centers in North America because of plentiful fish, including seven species of salmonids, according to the exhibit. The center’s display includes a video taken in Celilo in the 1940s, when fishing at the falls attracted some 2,000 people.

Tribes along the Columbia shared an identity as “waykaanaspam,” people of the salmon. The exhibit paints a picture of what this bounty was like further inland, citing accounts that fish was 50 percent of the Nez Perce diet and that sockeye were so plentiful in Wallowa Lake that women trained dogs to fetch them at the headwaters. In the early 1900s, they plugged irrigation canals around Wallowa.

In the first half of the 20th century, river development destroyed centuries of tradition. 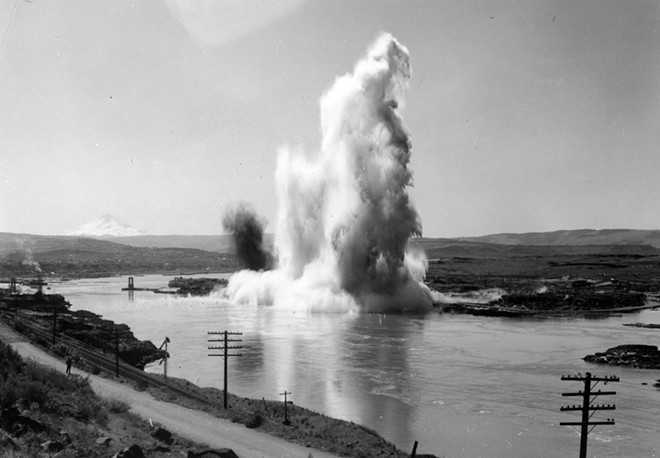 This photo was taken the first day of blasting in preparation for building The Dalles Dam. Blasting took place downstream from Celilo Falls which was inundated by water when the dam went into operation.

The exhibit continues with the tribes’ view of the march of the dams on the Columbia and its tributaries. This begins with Bonneville Dam in 1938, up to the public uprising against the High Mountain Sheep Dam in the 1970s, which was never built, leaving Hells Canyon, North America’s deepest river gorge, intact. In broad strokes it describes disputes with the government, meager settlements and advocacy that continues today.

While tribes, conservationists and the fishing industry lobbied Congress to take into consideration the impact dams would have on fish, the Bonneville Power Administration hired folk singer Woody Guthrie in 1941 to write songs promoting hydroelectric projects on the Columbia. In one month, he wrote 26 songs about the river and benefits of dams, and his work was widely distributed.

Drilling and channel blasting for The Dalles Dam, which would inundate Celilo, began in 1953. In the exhibit, you can see a photo of the first blast. A placard notes it took place the same day as the annual Spring Salmon Feast at Celilo. The falls disappeared on March 10, 1957, under a 24-mile reservoir. Some accounts say 10,000 people came to witness the spectacle, but the exhibit states only a few indians attended, and those who did openly wept and sang songs of mourning as the ancient village, fishing and burial grounds disappeared.

In 1964, the Federal Power Commission issued a license to the Pacific Northwest Power Company to build and operate the High Mountain Sheep Dam on the Snake River in Hells Canyon. Many thought it was only a matter of time before “Lake Mead of the Pacific Northwest” was created, which is how one person described what damming the river would look like. The exhibit details the advocacy efforts that led to a bombshell Supreme Court decision that no dam was in the best interest of the public.

“The importance of salmon and steelhead in our outdoor life as well as in commerce is so great that there certainly comes a time when their destruction might necessitate a halt to so-called ‘improvement’ or ‘development of waterways,’ Justice William O. Douglas wrote in the court’s decision.

The exhibit also explores tribal projects to restore fish populations and strengthen traditional laws. The Nez Perce Tribe with the Confederations at Yakama, Umatilla and Warm Springs, share jurisdiction of Intertribal Fish Commission. The exhibit explains that this work is inspired by the original law, which was “dishonored” when the river habitat was altered by physical barriers that changed the flow and temperature of water. When the river was no longer able to sustain the salmon the tribes argued that, according to treaty rights, the government was obligated to work with them moving forward. Recent developments will be discussed in a series of talks accompanying the exhibit.