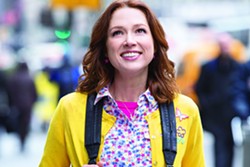 When “30 Rock” ended, it left a giant hole in our hearts. Thanks to Netflix and that Greek goddess of comedy, Tina Fey, that hole can now be filled.

“The Unbreakable Kimmy Schmidt” doesn’t star Fey, but Ellie Kemper as the titular Kimmy. However, it still has that Fey flavor as she writes and produces the show. There are numerous jokes (O.J. Simpson references) and characters (Jacqueline has similarities to Jenna and is also played by the same actress) that are reminiscent of “30 Rock.”

But “Unbreakable Kimmy Schmidt” is still its own show, with its own story to tell that is vastly different. Kimmy finds herself freed after 15 years of being held in an underground bunker as part of a religious cult. She decides that she wants to start a new life in New York City and meets various New Yorkers who help, and sometimes hinder.

Although Kemper’s Kimmy is naive, she is absolutely charming and a character you can’t help but love. The laughs come as she tries to not only navigate adulthood, but doing so in a big city after being cut off from the world for such a long period of time. She doesn’t know what vans to avoid and says things like “hashbrown” instead of “hashtag.”

Her guides in NYC are her roommate Titus (Tituss Burgess); landlady Lillian (Carol Kane); and boss Jacqueline (Jane Krakowski). Titus and Lillian are regular poor New Yorkers trying to get by, and they teach Kimmy the ropes of “fake it ’til you make it.” Jacqueline is a high-society New Yorker and shows Kimmy what happens when you do make it.

The plot of the episodes varies — the titles all have an exclamation point that emphasizes Kimmy’s personality — and seem simple until you take into consideration Kimmy’s lack of knowledge and experience in almost everything, except her determination. That’s usually what saves Kimmy: her unbreakableness.

The characters are fun and unique, and the stories are too because of the characters. Above all, the humor packs a punch. One liners, perfect deliveries, off-the-wall comments, snappy dialogue and satire. It’s almost like “30 Rock” never left us. It also has the most catchy and hilarious theme song I have ever heard.

“Unbreakable Kimmy Schmidt” can — and will be — binge-watched on Netflix.

Where to stream the 2021 Oscar winners