Zach Wilkinson/Inland 360
University of Idaho students Gracy McGreevy, left, and Kalyssa Montoya wrote and will direct and act, respectively, in "The Wife of Fabian Vitalik" opening April 22 at the Palouse-Clearwater Environmental Institute.

These are the all-encompassing facets that structure “The Wife of Fabian Vitalik,” a new, original play that debuts next week, written and adapted for the stage by University of Idaho students Grace McGreevy and Kalyssa Montoya.

Originally a short story written by Mariah Montoya – UI alumna, author and Montoya’s older sister – the fantasy play centers on the titular character, fisherman Fabian Vitalik, and his wife, a shapeshifter. The audience is taken on a journey that spans 30 years, as the romantic tale unfolds of how Fabian and the shapeshifter fall in love, ultimately culminating in a difficult decision both must confront.

McGreevy, who directs, and Montoya, who portrays the young version of the shapeshifter, co-wrote the play as a requirement for their senior capstone project. McGreevy had ambitions to produce her own piece, but was met with setbacks involving royalty fees for her original choice of show.

“Kalyssa was like, ‘Why don’t we write our own play?’” McGreevy said. “And we decided to write it in three days over Thanksgiving break. Three days up until 3 a.m.”

Zach Wilkinson/Inland 360
Luke McGreevy and Kalyssa Montoya rehearse last week at UI's Forge Theatre for the premiere of the student-written “The Wife of Fabian Vitalik."

Both have been involved in the university’s theater department throughout their college careers, having performed or assisted with a variety of shows, including the recent production of “Mr. Burns, a Post-Electric Play.” McGreevy, a senior, is studying interdisciplinary studies with an emphasis in arts administration, while Montoya, a junior, is studying theater with an emphasis and minor in music.

The playwrights had a difficult time securing a space for the performance but recently were able to book the Palouse-Clearwater Environmental Institute’s educational greenhouse, about which McGreevy expressed tremendous excitement.

“It’s really big, and it’s really pretty,” she said. “You kind of have to walk through a little nature path to find the space, and you enter this greenhouse and it’s just magical.”

The cast and crew for the performances consist of other UI students and faculty members, for whom Montoya voiced profound gratitude, as only a handful of participants will receive capstone credit.

“We have a lot of lovely friends that are very talented,” she said. “And we just asked them, ‘Hey, would you like to be a part of this project? We have nothing to give you for it, but it would be fun.’ And so many people said yes. Everyone is just doing it out of the kindness of their hearts and because they like the story, which is amazing.”

While interpretations of the play remain subjective, McGreevy and Montoya hope audience members will walk away from the performance with a few concepts in mind.

“I hope whatever they’re going through, they’re OK if their life changes,” Montoya said. “It will be OK if your life changes more than you think it should.”

“Love can exist in many forms,” McGreevy said. “It doesn’t always need to be romantic, and when love shifts, it is so powerful, and so important to hold that space.”

Brockett (she/they), a University of Idaho senior studying journalism and English, can be reached at bjbroc@gmail.com.
———

What: ‘The Wife of Fabian Vitalik’

Cost: By donation. Performance is family friendly, and children are welcome.

Of note: University of Idaho students Grace McGreevy and Kalyssa Montoya wrote the play, based on a short story by Montoya’s sister and UI alumna Mariah Montoya. McGreevy directs and Montoya acts in the production.

Another chance to see ‘Shakespeare (Abridged)’ this weekend 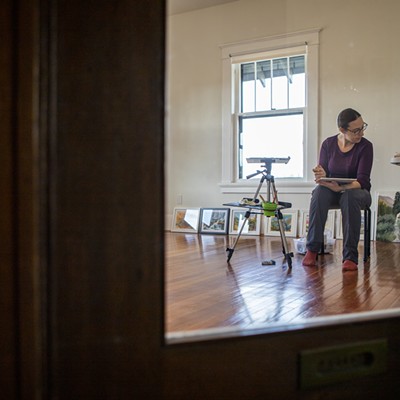