Since the creation of the Lewis-Clark Valley American Viticulture Area in 2016, new vineyards and wineries are sprouting up around the region. Inland 360 will look at new additions and changes to the area’s growing wine industry in the occasional series, “Grape Expectations.” 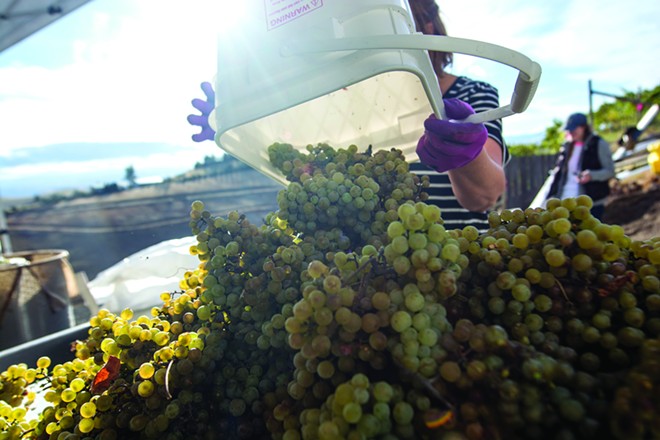 Tribune/ Pete Caster
Harvested grapes are dumped onto a processing table before being crushed into liquid at Spiral Rock Vineyards in Lewiston.

As September fades to October, the greenish fruit is at its peak, ready to pick. In one day, volunteers will pluck the grapes from the vines. They’ll be washed and pressed, and by evening fermenting into the first official vintage for Spiral Rock Vineyard.

Tribune/ Pete Caster
A volunteer walks through the rows of grapes at Spiral Rock Vineyards during a grape-picking party.

Davis jokes that the vineyard “was originally a gardening project that got out of control.”

With the help of friends Shane and Lori Hyde, they planted their first acre in 2014, knowing there was a growing interest from area winemakers in buying local grapes. The Lewis-Clark Valley American Viticulture Area was established in 2016. For a wine to carry the designation, at least 85 percent of its grapes must be grown within the AVA.

After their first harvest last summer, Davis decided to try his hand at making his own wine -- 700 bottles of it. They gave it away to friends and family. Response was good.

“Little by little, the idea of doing it for real started trading for a hobby,” said Davis. “Unsolicited feedback lit a fire under us to become a legitimate label. A total local product -- that’s what we intend to do.” 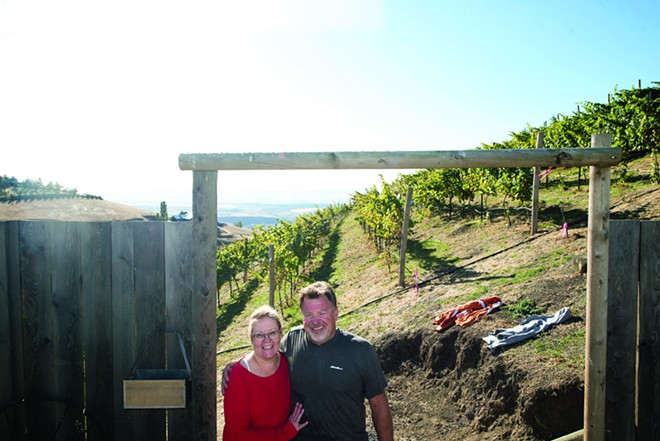 Pete Caster
Becky and Stuart Davis, owners of Spiral Rock Vineyard, pose for a portrait at the entrance to the vineyard in Lewiston.

Becky Davis works in wound care at Tri-State Memorial Hospital in Clarkston. Stuart Davis works in manufacturing. He was enrolled in the viticulture program at Washington State University but found himself falling asleep at night when he tried to study after a day of work. They decided to learn on the fly.

By the time the second harvest arrived this fall, the Davises were prepared with the federal and state food-handling licenses required before any grape processing can take place.

While most people think sweet when they think Riesling, the Davises make a dry Riesling.

Their two-story log home sits above the vineyard with a sweeping view of Lewiston and Clarkston. The steep hillside offers good air flow and drainage, while a western ridge protects the grapes from the hot sun on summer afternoons.

They planted Riesling grapes on the advice of Mike Pearson, of Colter’s Creek Vineyards and Winery in Juliaetta, who said they were easy to grow, Davis said. While the wine ferments in the coming months, the couple hope to develop relationships with area restaurants and retailers to sell it. Eventually, they may turn their home into a destination. They have another 5 acres to plant on should they decide to grow.

Recent life events made the couple reconsider how they wanted to spend their time, Davis said. Being a small part of the resurgence of an industry that flourished in the valley before Prohibition means something to them.

“We’re just a tiny, little bit of that, but it’s fun to be included.” 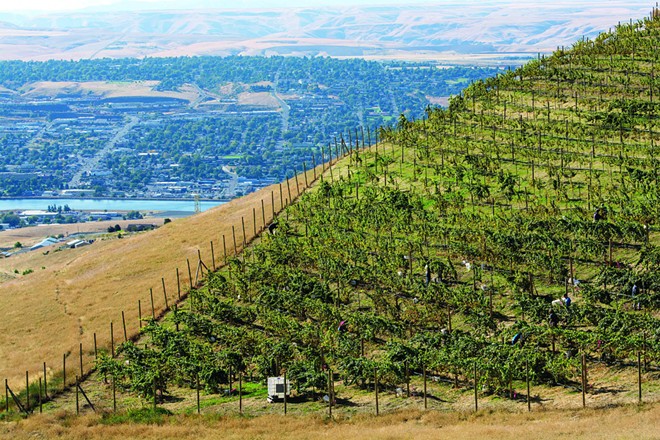