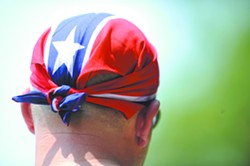 AP Photo/Mike Stewart
Don Elam wears a confederate flag bandana on his head at the 15th annual Redneck Games in East Dublin. Ga. on Saturday, July 9, 2011. The Games began in 1996 in conjunction with the Summer Olympics in Atlanta. The East Dublin Lions Club helps organize the Games and says all profits go to local charities.
By MICHELLE SCHMIDT

There’s going to be a redneck rendezvous on Saturday.

Some of you might shrug your shoulders at that, as if this just describes your typical weekend. This gathering is different, though: It is the Big Redneck Rendezvous, a first-ever event for the valley, complete with food, music and perhaps a broken toilet seat or two.

The big, outdoor redneck-themed party is also a fundraiser for the Willow Center. The night will include music from Dan Faller and the Working Poor — a local alternative Americana folk band — along with a pig roast and some PBR to wash it down.

And that’s not even the half of it. The evening will feature a variety of redneck games. There’ll be a 50/50 Annie Oakley Trap Shoot (guests must BYOG — bring your own gun), keg toss, tire roll, pellet shoot and more — basically exactly what you might imagine would happen if you let a bunch of rednecks loose at a carnival.

“Everything has a redneck twist,” says Judy Rooney, executive director of the Willow Center. “Even with the ordinary games, it’s not what you’d expect.”

So it’s a safe bet you’ll encounter some beards, cut-off jeans, a former plumbing accessory or two — and plenty of laughs to go along with it.

The fundraising event is $50 per person, which includes dinner, beer and wine (along with a mason jar to put it in), a red bandana and 10 tickets for the games. Liquor and additional games and game tickets are available for an additional cost. Each game is sponsored by a local business that will provide a grand prize — gift cards and beer among them — selected by drawing from the tickets of those who played the game.

Guests are encouraged to dress the part and can bring a lawn chair — if that’s what their redneck selves are inclined to do.

All event proceeds will go to the Willow Center, a children’s bereavement organization. The program offers free peer support groups for children who have experienced the death of someone close to them. It’s the only program of its kind between Boise and Spokane, Rooney says, and provide support groups in Lewiston, Pullman and occasionally in the schools.

“Just being with other kids, knowing they’re not alone, is huge,” Rooney says. With its family-centered approach, the Willow Center also offers free education and resources and held a summer camp that drew around 60 kids this past year.

The Redneck Rendezvous arose from a discussion by the Willow Center board about holding a fun, interactive event and an idea from Shelly DeAtley, at whose home the event is being held.

Redneck Dress Essentials Don’t know what to wear to a redneck party? Try any (or all) of these wardrobe components:

What: The Big Redneck Rendezvous