Although there are dozens of fantastic tabletop gaming conventions each year, the biggest gathering in the United States is Gen Con. This August, more than 70,000 gamers descended upon Indianapolis to discover the latest developments in board games, card games, role-playing games and other forms of “geek” fashion. I had the good fortune to attend and was able to demo about 50 of more than 600 exciting, new games released this year. Here are three highlights.

Evolution of the escape-room

Offering a new take on the escape-room-style game, Mystery House: Adventures in a Box (1-5 players, 60 min, age 14+) comes with two mysteries in the base game and offers ample room for future expansions. Players search for clues by looking through holes ,built into the side of the game box itself. Enigma cards are placed into slots on the top of the box and players work as a team to inspect the visible cards, hoping to spot clues to solve the mystery. A free app pushes you through the game, keeps time, and tracks progress. It’s a clever game that rewards attention to detail. My only reservation is that a pushy player could hog the box, making it difficult for shy players to search for clues -- but I suspect this will be a perfect game for a small team of friends.

If you love spelling (maybe Scrabble is one of your favorites?), then the new cooperative word game Letter Jam (2-6 players, 45 min, age 10+) is a must-have. During set up, each player gets a set of face-down letter cards that can be unscrambled to spell a word. Players then set their first card in their stand, with the letter facing the other players — you don’t know your own letter, but you can see all the letters displayed on all the other cards. 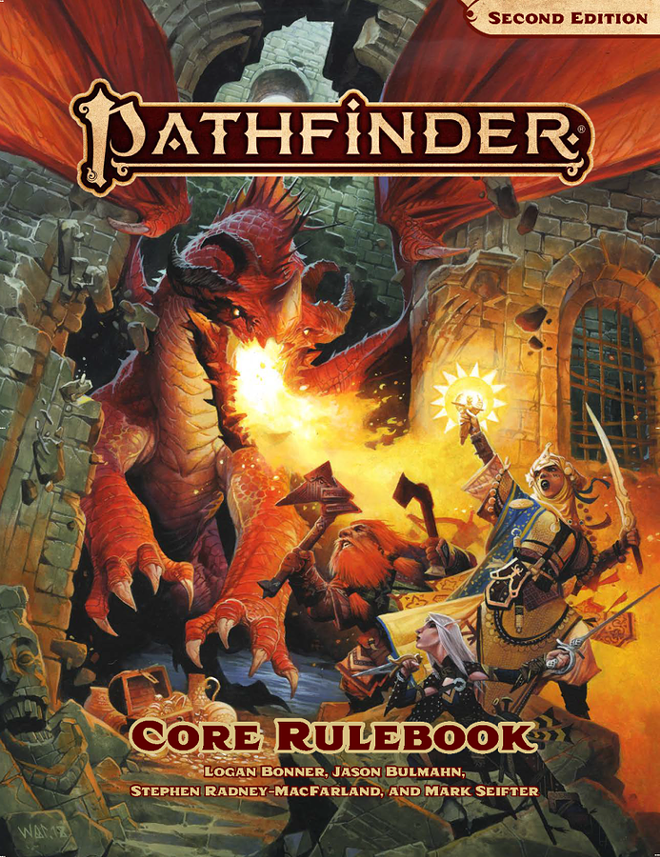 Perhaps the game that I was most excited by was the updated ruleset for Pathfinder Role-Playing Game, 2nd Edition. I was able to sit down at an hour-long demo and had a blast. My wife, friend and I were joined by a mother and her two pre-teen sons. The Game Master handed us each a pre-generated character. I played an old wizard, and my wife was a sturdy warrior. Our party investigated a mysterious temple, where we fought some poisonous vipers and inadvertently released an undead knight from his ancient prison. Most of us survived the encounter, and we laughed about the adventure for hours afterward.

The 2nd Edition Pathfinder Core Rulebook offers a complete guide to fantasy role-playing, but be warned: The book clocks in at an impressive 640 pages. The first 400 pages are packed with detailed instructions on how to create a party of fantasy characters. The rules of play comprise the next 40 pages. The final 150 pages are devoted to advice for Game Masters to help them run the best game possible. I adore my copy of the Pathfinder Core Rulebook, but it is not suggested for the casual gamer.

Even after a weekend filled to the brim with new games, there are still hundreds of interesting titles I am excited to try. I’ll be sure to share some of my favorites in the months to come.