Idaho’s no square. How the state got its shape. 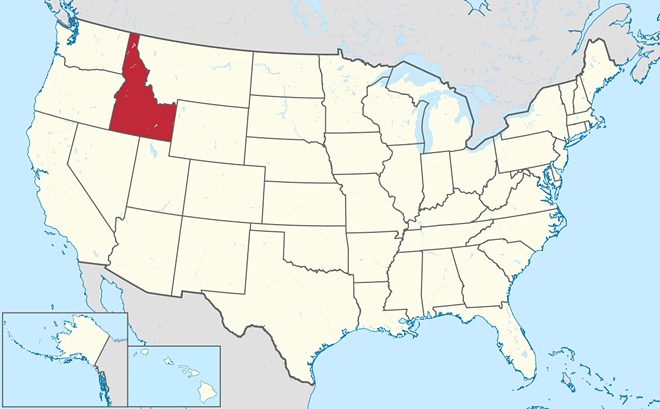 Idaho in red in map of the U.S. shows how different it looks from other states

Keith Petersen recently retired after 13 years as state historian for the Idaho State Historical Society.
Now he’s ready to give the lecture he waited his whole career to share.
Petersen will present “Straight Lines and Squiggles: How Idaho Got that Weird Shape” Thursday at the Monastery of St. Gertrude in Cottonwood. The talk concludes the 20th Annual Historical Museum at St. Gertrude Fall Lecture Series.
Having worked for various state historical societies since the 1970s, Petersen describes his Idaho border lecture as “my retirement project.”
“It’s the question I was asked the most,” he said.
Petersen’s lecture will focus on all of the state’s borders and have something to offer anyone interested in the history of Idaho. Petersen lives in Pullman and is the author of several books about Idaho and the Northwest and is a 2019 recipient of the Esto Perpetua Award for distinguished service to Idaho history. Since 2015 he and his wife, Mary Reed, have volunteered in assisting the museum in its exhibit makeover project.

The legend of the drunken surveyor

Probably the most scrutinized part of the Idaho border is along the northeastern side of the state where it connects with Montana. Starting around the Mullan Pass area, the border zig-zags its way down all the way to where Idaho, Montana and Wyoming meet.
One of the myths about this section of the border is that it was the result of a drunken surveyor. While entertaining, Petersen said there is no truth to the claim.
“One of our past governors liked to repeat this idea,” he said.  “It’s a myth.”

What could have been

Idaho is known for being a tourist-friendly state but according to Petersen, one of the biggest tourist attractions in the nation started out in Idaho Territory -- only to be taken away by the U.S. Congress in 1868.
Yellowstone National Park, which would become the first U.S. National Park in 1872, was originally part of the territory but became part of Wyoming when that state’s border was set in 1868.
“Congress wanted Wyoming to be shaped like a box, so they got Yellowstone,” Petersen said.  “There was no fight to keep Yellowstone in Idaho. No one was worried about it back then.”

Where does northern Idaho truly belong?

It’s a question that predates Idaho statehood: Does northern Idaho belong with the rest of the state or is it more logical for that section to be lumped in with eastern Washington and/or western Montana.
For Petersen, it’s a relatively easy answer.
“Our associations in this area are east-west, not north-south.”
And it turns out, the Idaho Panhandle was actually a lot closer to being part of eastern Washington and northern Montana than many people realize.
As the Idaho Territory was being formed in 1863, there were two plans.
The first was created by John Mullan, an explorer and mapmaker for whom the city of Mullan and Mullan Pass is named. He spent considerable amounts of time in what is today Washington, Idaho and Montana, and his plans for Washington Territory included northern Idaho and western Montana.
The U.S. House of Representatives passed his plan in 1863 but it was thwarted by a map created by William H. Wallace, the Governor of Washington Territory. Wallace’s map created the Washington-Idaho border as it looks today.
Wallace’s map was approved by the U.S. Senate on the last day of the 1863 session, so the U.S. House had no chance to debate. President Lincoln signed it into law and the rest, as they say, is history.

WHAT: “Straight Lines and Squiggles: How Idaho Got that Weird Shape”

Shooks to shake it up: UI grads headline this year’s Jazz Fest

Ordering laughs from the drybar