If you build it they will shred: Palouse skate park opens after 17 years 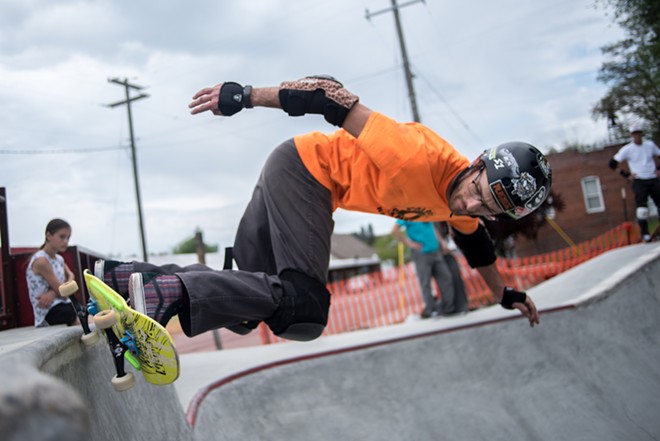 Luke Hollister
Aaron Flansburg, director of the Palouse Skate Park, does a backside slash grind at the park he started planning 17 years ago. It opens June. 2.

In the movie “Field of Dreams,” a voice tells an Iowa farmer, “If you build it, they will come.” The farmer takes it as an instruction to build a baseball diamond in his corn field.

Seventeen years ago, a Palouse wheat farmer had a similar dream, a skatepark in his rural hometown.

Saturday, Aaron Flansburg will see that vision realized at the grand opening of the Palouse Skatepark and Tony Kettel Skate Gardens.

The 10,000-square-foot space is a privately funded, privately operated, nonprofit park that will be open to the public. Flansburg was 21 when he started work on it. Today he’s 38, “but I still skate,” he said in an interview on a recent day when rain was keeping him from seeding his fields.

While the bowl in the park was built by a professional crew, virtually everything else was built by Flansburg, his friends and other volunteers. It took years to raise the money to build the park. Besides donations and fundraisers, Flansburg’s band, Random Noise, played special events like Haunted Palouse. As the park evolved, volunteers tested it out, made changes to the design and added features.

“The way we built it was so unusual. There are other skater-built, DIY parks in the country, but to this size, scale and complexity, there are very few,” he said. “If something comes up and we don’t like the way it skates, we change it. I guess that’s one of the advantages of taking forever to build it.”

The park is named for the local resident who donated the land upon which it sits. It has an unusual shape: linear instead of square. In addition to the bowl created by an international skatepark specialist who helped design and construct Burnside Skatepark in Portland, other features include a skatable amphitheater with three long, curved steps and a smaller bowl he and other volunteers call the koi pond. There are street features like Jersey barriers, stairs, ledges and handrails and an “unreasonably large pole jam made from an old grain auger,” said Flansburg. A pole jam is a a maneuver skateboarders do over a bent pole.

Volunteers will continue to maintain the park after it opens, taking out the trash and monitoring activity there.

“It’s not a city parks department project. The responsibility is ours,” Flansburg said.

“I’m really excited to skate and play and get out of town, instead of just work every spare second. I think that goes for all the folks that have volunteered,” he said. “I feel like I need to say some thank yous.”

Here's a virtual tour of the Palouse Skatepark from the park's website.

OF NOTE: Following the 9 a.m. ceremony there will be lessons in skateboarding and skate-park use. Helmets and pads are advised. The park opens for skating at noon.