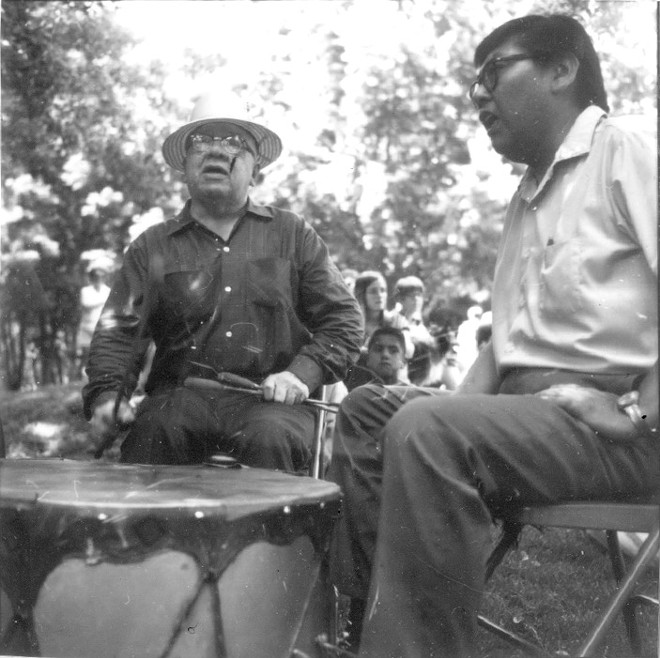 Rick Ellenwood (right) with Cy Red Elk (left) around the big drum circa 1970.

Nez Perce elder Rick Ellenwood talks about spiritual respect for the Earth and greed, fishing at Celilo Falls and many other topics in a 1996 interview with Jane Fritz.

This is one of dozens of oral interviews with Nez Perce elders the nonprofit group the Idaho Mythweaver is working to preserve digitally.

I’m a strong believer in the medical ways of spirituality. I’ve been through so many things in my lifetime, and I remain strong in my spiritual power that I’m being led by my Creator to help my people to better understand that life is only good when you live a good, clean responsible life and leadership and honor and respect of our Earth, which we are now devastating to the point that food is becoming scarce. Salmon is becoming scarce. Our game is becoming scarce. Our animals are becoming endangered: they call them “endangered species.” There was never such a thing as endangered species during my time! Now we are facing some of these crisis situations, and why? Because we get a little greedy. Greed has been a bad word, like my grandfather said…that’s what dictates to everybody. Jealousy is another word. We boast a lot. We brag a lot. Other countries…look what Hitler did; he boasted that he had the best army in the world. Fighting over property.

Fritz: Did greed exist back in the old days?

It’s always existed and that’s we were taught that “ip-sac” was being stingy. Many times somebody will be stingy with what they had that they didn’t want to share. Whether it was food, or knowledge. In our time, we try to teach everybody to learn how to share, whether you have a little bit of food, or whatever. To make sure that the people who are traveling along, you can help them out in food. Ip-sac was being stingy, where you didn’t share. Like one word, “ho-lat-us,” for being mean. People were being mean because they didn’t want to…that was a way of a cover-up. If you’re mean enough, people are going to recognize you. If you’re mean, they don’t want nothing to do with you. So that was a way of hoarding or keeping whatever they had to themselves.

On fishing at Celilo Falls ...

Grandpa had told me to go ahead and take this one fish home, and I was carrying it on my back and it was pretty heavy. I was walking uphill, and these people from all over were watching us fishing and everything that was going on, and they stopped me and they said, “young man, can you sell this fish to us?” Of course, by that time I hadn’t had my pop, I hadn’t any ice cream or anything for a long time, so they said they’d give me $5 which was a lot of money to me. And so I sold it for $5 and went up to the store and I had a bottle of pop, and an ice cream cone, and also ate a sandwich, and got some candy bars. And shared it all with my buddies that was with me. Of course, I played the rest of the afternoon, I never did go back to fish. We went along the river there and we played.

When I got home that evening, my grandmother was there and I seen that look on her face, like oh-oh. Grampa said, “I want to talk to you. What did you do with that fish that I sent you home with to cook?” Well, I said I had sold it. I said I got a little bit of money left, I tried to give him that money, but he didn’t want the money. He said, “You know that food was supposed to be for our supper tonight, and suppose to eat it tonight and all share in it together. That food is more important than money. Money does not make you feel full inside. Money will buy things, but money is not that valuable, but food is. That salmon gave its life to us, for us to share.”

Needless to say I got a good lesson in the back room, and in them days child abuse would have been number one in our case because I’d get a whipping, you know. But it was expected to get a whipping for something like that. Because you were taught. After that, I never did do it again. No matter what. Because then I learned what it was for, why that salmon was so important. So I tell it to the kids nowadays. Indian food, you don’t throw it away, you just eat what you can, and can’t eat; don’t take more than you need.

Update: This story was corrected 12/2 to note the interview was done in 1996. The wrong year was initially included because of incorrect information given to Inland 360.