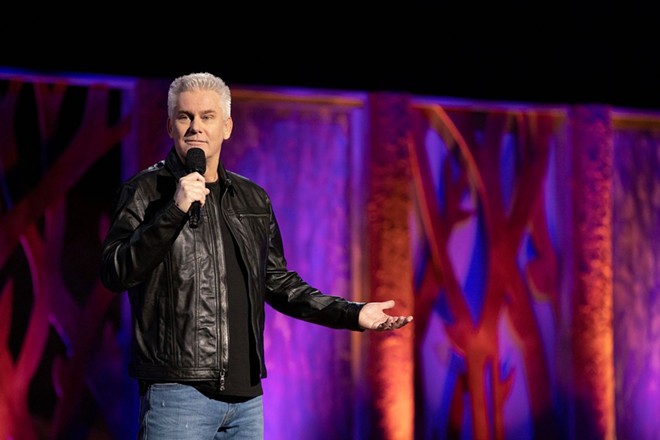 “I don’t know what happened either,” he tells the audience. “COVID hit, I went into hibernation and came out a senior citizen.”


Known for down-to-earth, self-deprecating humor in his routines, Regan, 64, is no different when discussing his craft off stage.

“I’ve had people say silver sounds cooler, but I’m like it also sounds a little pretentious, so I’m going with gray,” he said in a recent phone interview.


Whether he’ll cover that territory again Friday when he plays the University of Idaho’s ICCU Arena for the Moscow Comedy Fest is anyone’s guess.


“I like to keep turning the material over, so I like to think people who have been before will see things that they haven't seen before,” he said. “I’m proud of putting a lot of new stuff out there.”


In these particularly polarized times, Regan’s comedy remains accessible for perhaps a wider swath of potential fans than many other standup comedians.


“I guess it depends on how you look at it,” he said. “Some comedians do like to get political, and I support them completely. I think people should do what they want on stage.”


His act, including “On the Rocks,” tackles a diverse array of topics, but not overt politics.


“I do bump up against it,” he said. “I think people would be surprised at some of what I talk about.”


Still, he said he tries not to push it so far that someone in the audience would leave.


“I want people to feel welcome,” he said.


Fans who’ve seen Regan’s two episodes of Jerry Seinfeld’s “Comedians in Cars Getting Coffee,” know their rapport is obvious. The two share a similar style of observational comedy, including an ability to craft jokes about a broad range of sometimes-raw life experiences without leaning on profanity.


Asked if he and Senfield are as tight-knit as their appearances together might suggest, Regan demurred.


“We’re friendly. We hang out occasionally. We’re not in constant toucnh with each other,” he said. “We’re comedy friends.”


Regan lives in Las Vegas, and if Seinfeld performs there he’ll watch his show, maybe go out to dinner with him.

After growing up in Miami, he went to college “in the mountains of Ohio,” a joke relatable to anyone local who has gently — or not so gently — let a visitor from somewhere flat know the Lewiston Hill is not a mountain.


This is Regan’s first time in Moscow, though he performed in 2010 and 2017 in neighboring Pullman.

“I love doing what I do because I get to play all kinds of cities and places big and small, and everything in between,” he said.


Once described as “the funniest stand-up alive” in Vanity Fair and “your favorite comedian’s favorite comedian” in Entertainment Weekly, Regan is a household name for countless comedy fans, but he’s not going to brag about it.


“I’m not sure what kind of caliber I am, but I'm thrilled to be performing there, and I’m looking forward to it,” he said.


Fans know his 2004 special “Brian Regan: I Walked on the Moon” includes a bit about just that. Now might be his chance to make good on that dream, with NASA’s Artemis I set to restart lunar missions, though of course last week’s launch was scratched because of technical issues.


“Well, they scrubbed the mission because I was late for my flight to get there,” Regan said.


OF NOTE: The university’s clear-bag policy will be in effect, prohibiting backpacks, large purses, totes and drawstring bags. Small clutch bags and transparent bags no larger than 12 inches by 6 inches by 12 inches are allowed.