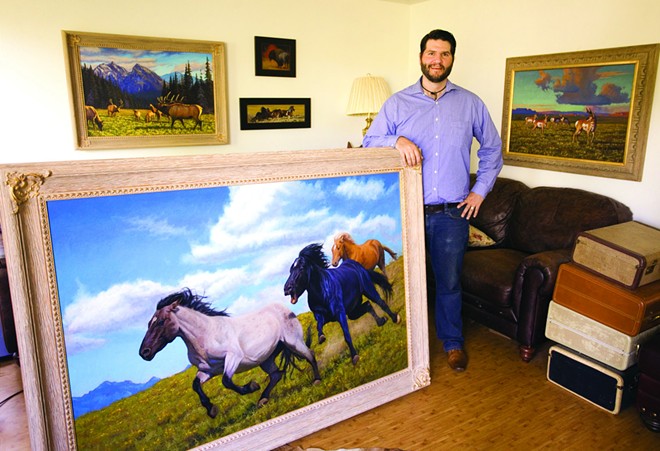 MOSCOW -- With a paintbrush, artist Tobias Sauer brings Montana’s big sky country to life in the back bedroom of a small Moscow apartment.

The little room is full of things to help him remember the land and its features, from the hue of its clouds to the way the grass bows to the wind on the open prairie. Above the window hangs a canoe paddle baptized by the Missouri River, where he learned to read water with his father. A ranger hat from his time directing tourists in Yellowstone National Park hangs above a nest and maps of human anatomy. There’s a calfskin rug and a martingale breast collar owned by his great grandfather.

“My heros have always been cowboys and nature,” said Sauer, the 2017 Moscow Artwalk featured artist. 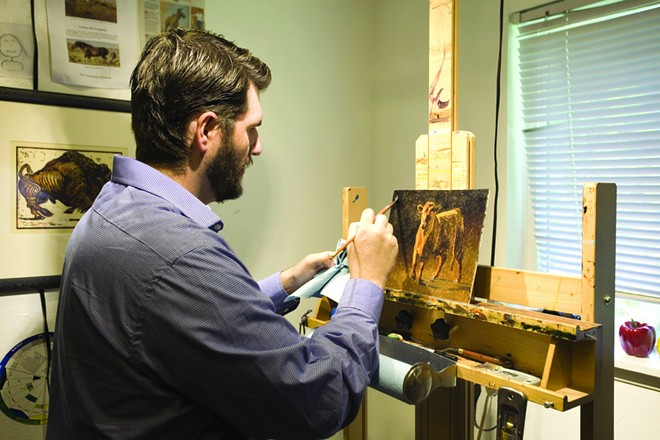 Geoff Crimmins
Tobias Sauer works on an oil painting he just started at his home in Moscow May 2.

A fifth generation Montanan, Sauer was born and raised in Lewistown where a nearby wildlife refuge bears the name of famed oil painter Charles M. Russell, whose Sauer’s style could be compared to in his attention to realism and subject matter. Now in his mid-30s, Sauer studied art in college in Montana but was disillusioned by his professors’ focus on expressionism over form. He switched to the environmental program which led him to various jobs, including a stint as a ranger in Yellowstone.

“It was amazing both as an artist and as someone who loves nature but I don’t know what was scarier at times, the people or the animals,” said Sauer, who got tired of answering one question over and over again, “when do the elk turn into moose.”

“It’s hard to answer with a straight face the hundredth time you hear it,” he says. “I think we’re just so removed from nature. Meat comes in cellophane.”

Other environmental jobs followed but that road ended the day a bull turned on him in a stockyard, breaking his leg and mangling his body. Over the next five years he faced five surgeries and became lost in debt, depression and health problems. The life he’d built for himself disintegrated until he was nearly homeless. His family calls it his “wilderness period,” he said. 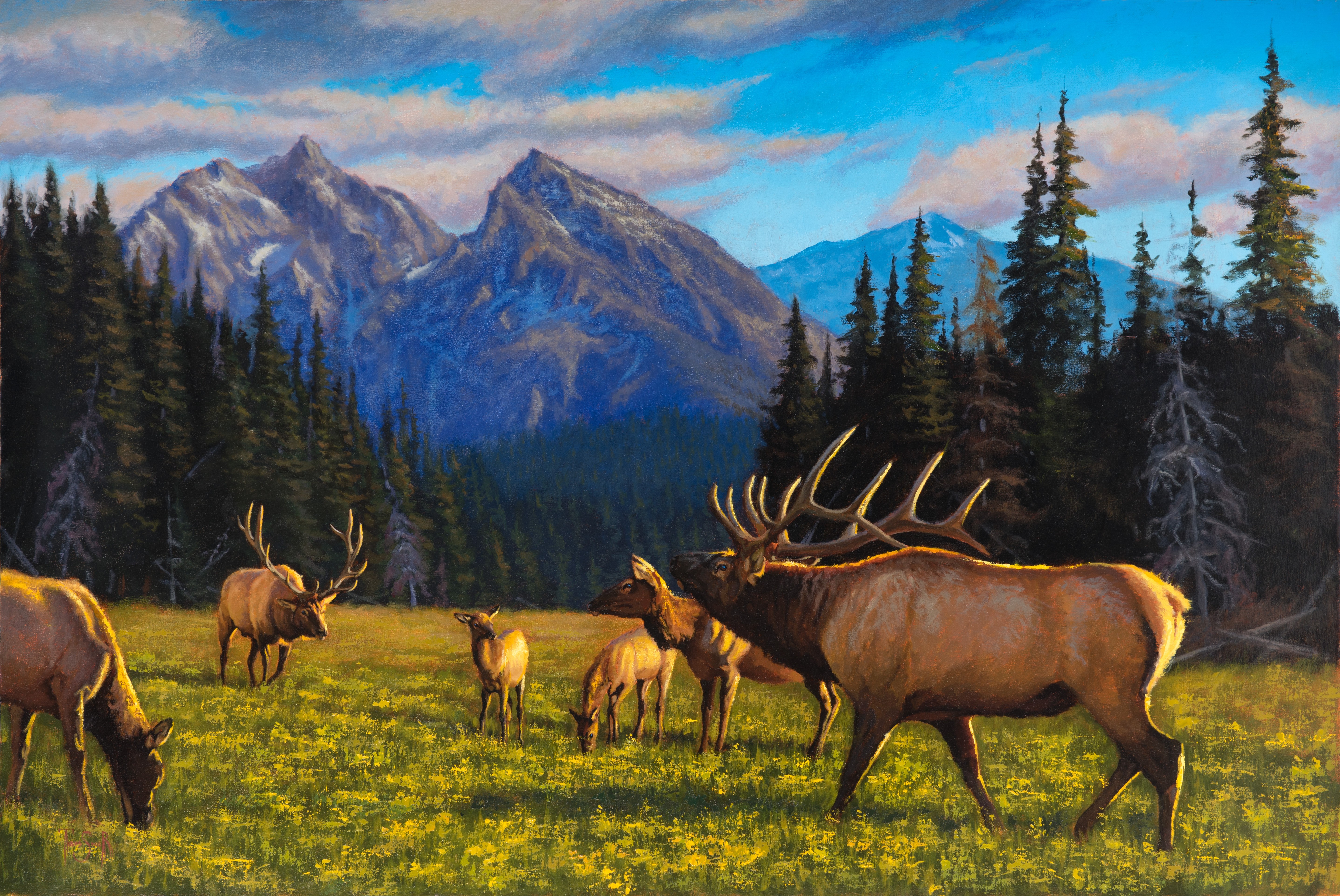 AFTER IMAGE
He went home to Lewistown where he met his wife, Andrea Sauer, who was studying law at the University of Idaho. She saved him, he said. And he started drawing again.

“I didn’t have anything else but I had this,” he said of his art. “At the end of the day I had accomplished something.” They married and he moved to Moscow. He turned to oils and started showing his work on his Facebook page. People started asking how much it cost.

“That’s when the wheels started turning: I can do something with this. I can go someplace,” said Sauer.

He found a friend and mentor in Spirit Lake artist Joe Kronenberg who helped take him to the next level as an artist, Sauer said. He also found support in Moscow’s arts community. Today his paintings of horses, elk, cattle and other majestic animals fetch anywhere from $150 to more than $10,000, depending on the size.

He continues to refine his skills, seeking nature’s truths with his brush.

“There’s this highfalutin attitude I don’t get about impressionism. I’d love to bring back a love of form and technique,” said Sauer, whose oil paintings will be featured at the Third Street Gallery in Moscow City Hall during artwalk. A reception is from 5 to 7 p.m. Friday.

Moscow will be alive Friday night, June 16, with art, music and more for its 13th annual Artwalk.

More than 60 businesses will showcase work by 125 artists. Most receptions start around 5 p.m. All events are free. Maps will be available Friday at the Moscow-Pullman Daily News, the Lewiston Tribune, the Moscow Chamber of Commerce and online on the City of Moscow website.

Highlights - Kicking things off, the City of Moscow Public Works Open House and Barbeque, catered by LocoGrinz, is from 4 to 6 p.m. at the Water Department.

- City of Moscow Poet Laureate Tiffany Midge will give a reading at a reception starting at 4 p.m. at the Intermodal Transit Center.

- Arts and crafts demonstrations and food vendors will be stationed along Main Street and in Friendship Square where there will be live music from 4 to 10:30 p.m. Demonstrations include fly tying, portrait sketches, Renaissance crafts and glass blowing, all starting at 5.