A photograph of couples holding hands, a cocktail glass with a lipstick rim, a mixtape and a cellphone sit behind the glass at the Museum of Broken Hearts — a museum imagined by Moscow musician John Cronin. He calls it a depository for items that signify what once was. 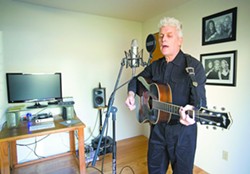 Geoff Crimmins
John Cronin performs in the recording studio in his Moscow home on Friday. Cronin released a roots rock album, "The Museum of Broken Hearts," in December.

And it’s also the name of his first CD, “Museum of Broken Hearts” by Johnny and The Cameos, inspired by the Museum of Broken Relationships in Zagreb, Croatia, a place he has never visited.

“The museum was created by a couple who was breaking up and shared objects,” Cronin, 63, said. “People would donate objects to the museum that represented what was significant in their relationship, and they would tell a story about why it’s important.”

The museum inspired the songwriter’s album name, cover design and song “Objects of Love,” which was recorded in Moscow and mixed in Portland, just as the other 11 tracks on the album were.

The CD takes listeners beyond Croatia and to places such as Paris with the track “The Ballad of Edith Piaf,” and all the way to England, too. Half of the album’s songs reflect the music Cronin heard as a teenager on the radio. 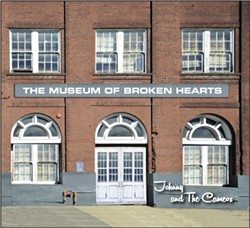 Johnny and the Cameos' "The Museum of Broken Hearts" was released in December.

“I wanted to create the feeling I got when I first heard those British bands come and play,” he said. But then he’s got a few jazz numbers and a folk song tribute to his daughters, too.

With “The Ballad of Edith Piaf,” Cronin said he tried to create the sounds of a Parisian cafe.

“How do you do that in Moscow?” Cronin asked. “You find a great accordion player. You have a great bass player.”

Cronin found 12 Northwest musicians to record on the album.

Cronin would record vocals and guitar, and send each musician an MP3 of the recording for them to rehearse with. Then they’d come into Cronin’s home studio, which consists of a nice-sounding room in his house with microphones and a laptop, and record — sometimes for three or four sessions.

Some musicians live hours away and most of them hold full-time jobs in fields other than music. So it’s no surprise the CD took about 2 1/2 years to record, as all of the Cameos never actually played in the same room together.

The raw files were then mixed with the help of a mixing engineer in a Portland studio, and the CD was released Dec. 13.

“It made me love music more,” said Cronin, who also works as a mediator. “I had a limited amount of time and opportunities for it. Evening is when I would write and record, and on weekends. But anything worth doing, it doesn’t matter how long it takes you.”

Hard copies of “Museum of Broken Hearts” can be found at Paradise Ridge CDs and Tapes in Moscow, Record Exchange in Boise and online at CD Baby. Digital downloads are available on iTunes or Amazon. Prices range from $9.99 to $14.98.