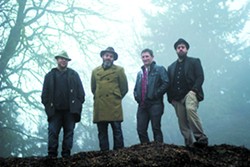 Michael Mosher is a weird little bird in the best of ways. Mosher was born in the cute little Lewiston-Clarkston Valley and can play many instruments. He also rebuilds guitars and other stringed instruments. Mosher plays in a Portland-based band called Folkslinger, which is coming to the area to play a pair of shows this weekend: at One World Cafe in Moscow on Friday, May 15 and Hogan’s in Clarkston on Saturday, May 16. Mosher requested that my band, The Twine, open up for Folkslinger on Saturday.

Marvin Lee: When did you first get into music and what was the first instrument you learned how to play? Michael Mosher: I messed around with a mandolin when I was around 9 but I first really got interested in playing music when I was around 10 or 11. That is when I heard this lovely little group called Nirvana. I was really inspired by Kurt Cobain. I am left-handed and he was also left-handed. When I was about 12-years old I started playing music with Austin Moody (The Maple Bars/The Twine/Struggle Club). We grew up on the street together in the Clarkston Heights. He taught me my first few licks and then I took it from there. I also play the drums. Something about it is real primal.

Please give us a running list of all the bands you have played in for just for fun, OK? The first band I was in was called Dyslexia when I was in eighth grade. In high school I was in a band called Oracle, which was kind of a Tool type of band. Then I was also in a crappy garage-punk band called the Bad Day Penguins. From there I played with whoever I could. The Murrs, which is kind of experimental math-rock. The Pagans, which was indie or alternative rock. Stachybotrys. Thunder C**t. Many Mini Elephants. The band we were in together, Hearts Fall Like Leaves. Prom and the Subsequential Events. There are a few others like Descendants of Beowulf, Pedals and Wires, Mikey Builds With Legos and many, many more.

You developed an itch to move to Portland. Did you move there for musical reasons and why did you decide on Portland? All the bands I was in broke up and I wasn’t doing much. Jay Cobb Anderson, Tyler Thompson, and Keith of Fruition all moved to Portland and were starting to make it. Brad Parsons also moved there and was playing in a couple bands as well. Then Austin Moody moved to Portland along with Sam Emerich and our original plan was to start a band together. We played with a few drummers and it just didn’t work out. Then everyone’s personal lives took over.

How did you hook up with Folkslinger? Mark Macminn is the lead singer and songwriter for it all. At the time he was married to a co-worker of mine and he came to my first birthday party in Portland. My parents were there, too, and we hung around the fire pit. My dad started playing some guitar and I joined him on mandolin. Then Mark joined in on the action. We started a project called Bare the Butcher. That fell apart. We both started playing some acoustic shows together every few months. Then we got a full lineup going with Dave Kelsay on drums. Then Rob Wright joined in on bass. I play guitar and mandolin in Folkslinger.

Metallica or Slayer? Well, I’ve never been into Slayer. Metallica, ugh, sometimes those guys just piss me off. I would have to go with Metallica though. I love their early stuff.

Me Without You or Minus the Bear? Me Without You. They are a little bit darker, well, they used to be. Their lyrics are very poetic. They speak to me more.

What are Folkslinger’s influences? I would say it’s different for everyone. I can’t speak for the other guys. Lately, I have been into the Wailin’ Jennys, which is an all-female folk group that is something I have been big into lately. I get a lot of inspiration through them. Also, the new Ryan Adams album has pushed me into the direction I am going into on guitar.

Do you have any advice someone who wants to get into playing music? Do you have a practice regimen?

I have realized that the more I play the less technical sound I have to be. Like being really good is less and less of a big deal. As a kid, you want to be the loudest and the fastest player. As I have gotten older, I just want to make the song good. Write more for the song rather than for myself.

Lee is a musician and aspiring poet who resides in Lewiston. He can be contacted at marvin.lee@live.com.