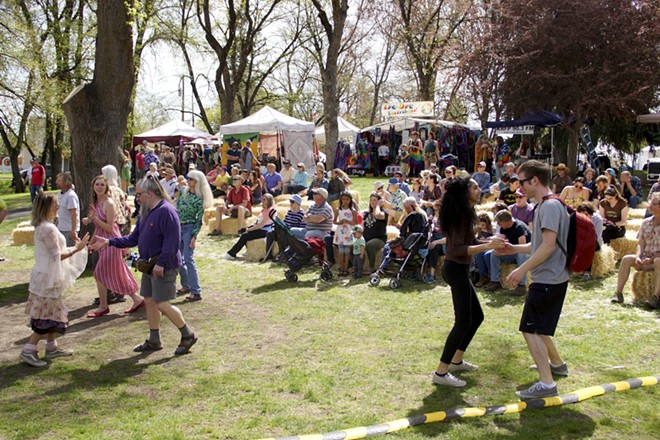 Kai Eiselein
People dance in front of the stage at a past Moscow Renaissance Fair. The 2022 fair starts Saturday.


We asked you to share your favorite area fairs and festivals, and several Inland 360 readers came through. David Hall, of Moscow, is the winner of the lunch cooler pictured on the cover of our April 7-13 edition, after his entry was drawn from the submissions we received. We’re including his nomination, for this weekend’s Moscow Renaissance Fair, along with other readers’ fave fests:

The Moscow Renaissance Fair, all about the celebration each year of the return of spring, is going on 50 years old. It is always free to attend; has great artists and craftspeople who sell their own work; food is good, provided by noncommercial organizations who use the profits for community betterment; and there are two full days of outstanding live music and other entertainment — all without corporate sponsorship. The fair strives for zero waste and sustainability. It is both adult- and kid-friendly.

My favorite area fair is the Renaissance Fair at East City Park in Moscow. The Ren Fair is a two-day celebration that has been around since 1974. We've been attending sporadically since the ’80s and ’90s, when our sons were preteens/teens.

We've attended a few times by ourselves since our sons moved away and started families of their own. It's still enjoyable, (but better with kids!).

The Ren Fair vibe is friendly and chill, and it's uplifting that it seems to be the unofficial “start of spring” — because by this time the snow is mostly gone, the sun is out and springtime and hope are in the air.

There are food booths, music, a parade, arts and crafts, and a maypole — a maypole! We were particularly intrigued with the costumes and dancing around the maypole, and the general happy atmosphere of the performers and spectators.

The crowd is respectful and artsy, and the whole scene is simple and harmonious. I like the peaceful vibe and look forward to The Ren Fair this month, after two years of relative COVID-19 inactivity.


Art Under the Elms (annually, in April)

The Dogwood Festival’s Art Under the Elms holds the most special place in my heart; it's where I met my husband and all my lifelong friends. The moment he walked out onto the stage to play music, I said “I'm going to marry that man someday.” And here we are, almost 20 years and three kids later! It's a wonderful event with such diverse and fun vendors, and reminds me of my mom (she's had a thing for "pink trees" for as long as I can remember). The memories associated with the Dogwood Festival are monumental and are what has shaped the life I have now.

I love the annual small town celebrations, such as Genesee Community Day (where I now live) and Bovill Old Timers’ Day (where I grew up), for example. Where people come together to enjoy the parade in the morning, indulge in delicious homestyle food of all kinds, try their hand at the egg toss or dunk tank, dance to great music in the evening, and, best of all, catch up with old friends and make new ones. These festivities are all about good old-fashioned fun and American values.