When a game offers a high number of scoring options, players call that game a “point salad.” In 2019, designers Molly Johnson, Robert Melvin and Shawn Stankewich created a card game that plays off of this concept by offering more than 100 ways to score. With a sly wink to gamers, they named their game Point Salad (2-6 players, age 8+).

A fast and fun drafting-style card game, Point Salad is easy to learn and quick to play. Each card features one of six different types of veggies, which players will use to create their own salads. But the magic of this game is that every single card has a unique scoring method on the back. For instance, one card might offer 3 points for every cabbage you collect but deduct 2 points for every tomato. Another card might give 8 points for every set of three yellow peppers you collect. The assortment of scoring possibilities seems endless, allowing for a true “point salad” style of gaming.

To set up the game, gather a certain number of veggie cards according to the number of players in the game and shuffle them together. Divide this pile into three roughly equal-sized decks, each with the scoring side up. Then deal out two cards below each deck, veggie side up.

On your turn, you can do one of two things: You may draw two veggie cards and place them in front of you as part of your personal salad, or you may draw a single scoring card which will apply to only your salad. If you drew veggie cards, flip over two new veggies so that the next player always has six veggies to choose from. Then the next person takes a turn, either drawing two veggies or one scoring card. 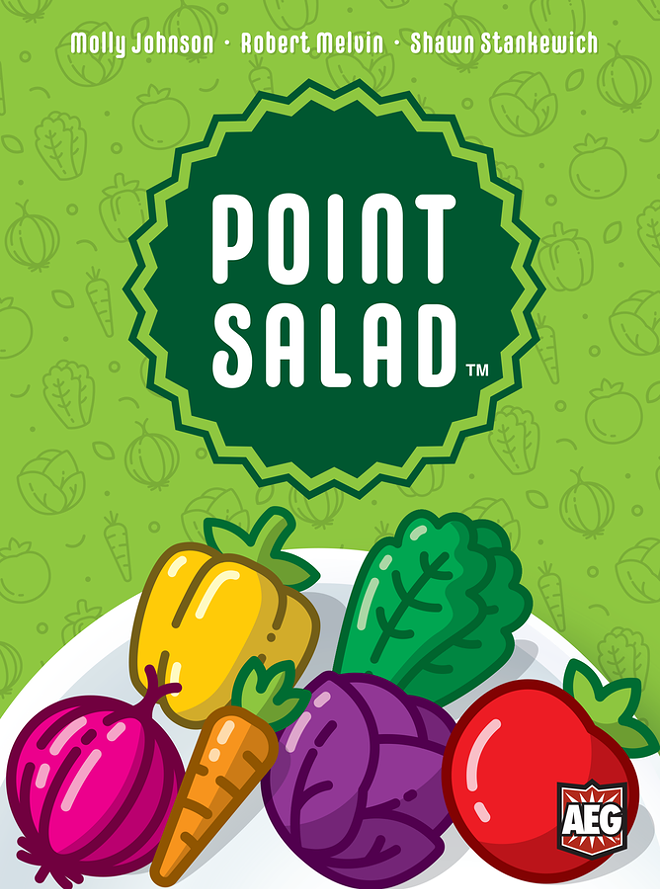 As new scoring cards are revealed, players will have to form a strategy. Will you spend your turn collecting veggies to build up your salad, or will you grab a new scoring card to bolster your final score? Once every card has been drawn from the three decks and the veggie area, players score their personal salad according to the scoring cards they gathered. Whoever earns the most points declares they created the best salad and wins. Typically, a game lasts about 20 minutes, so players often will want to play a few games in a row.

Point Salad takes minutes to learn but offers hours of exciting play. Each game presents dozens of new scoring combinations, which guarantees that no matter how many times you play, every game will feel fresh.

Need some board games or puzzles? Here are two local stores that can provide: