Shine your stein, Octoberfests are here 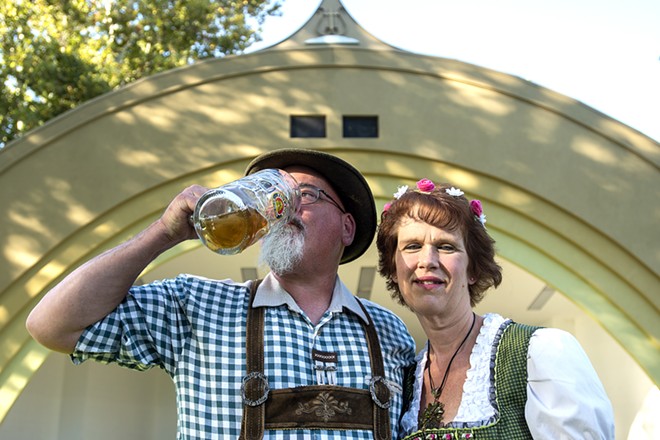 For many, October means it’s time to go hunting -- for beer.

Beach season is long gone and winter is coming, so cultivating your beer belly might sound like a fine idea. You get a jump-start on that Saturday at two 21-and-older, beer-centric events in Lewiston: Octoberfest at Pioneer Park and Octobrewfest at the Nez Perce County Fairgrounds.

For 23 years, Lewiston’s Oktoberfest has offered area homebrewers a festive setting to showcase their craft.

Members of the Hells Canyon Homebrewers Club dress up in traditional German costumes, shine their beer steins and pour their best brews for the annual event in Pioneer Park.

“It’s a hoot. There’s a large number of German descendants in this area; they all don’t come but there’s a big, rich heritage in that,” said Mike Busch, a founding member of the club.

The club started with a list of people who bought beer brewing equipment at Morgan Bros. & Company, a former Lewiston restaurant supply store. Today the club has about 25 members who share advice and tips, Busch said. They come together with their different styles of beer for Oktoberfest.

Broyles has pondered the question as to why October is the traditional month to celebrate beer.

“We’ve done these events in the summer, and the heat really impedes your ability to tolerate alcohol,” he said. “I think the cooler weather helps your body absorb the alcohol better.”

COST: $15, tickets available at Smokes & Suds in Lewiston and Riverport Brewery in Clarkston.