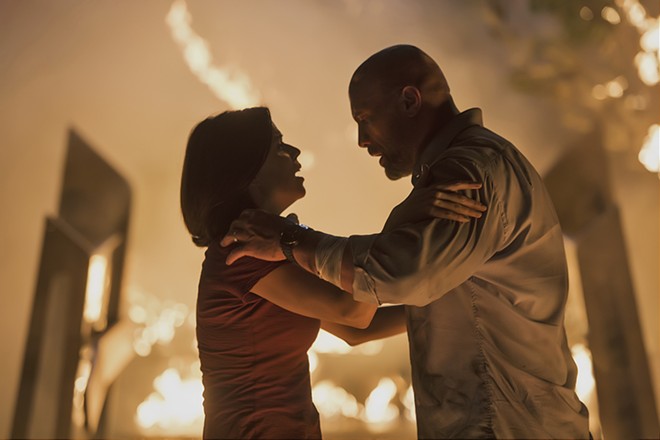 “Skyscraper” promises hot action, but turns out to be a cooler film than what audiences would want or expect.

Will Sawyer (Dwayne Johnson) is an FBI hostage rescuer, until he loses his leg in an explosion and decides to go into the private security sector.

He brings his family to Hong Kong where he lands a job as a security consultant for the biggest and most high-tech building in the world. Of course, things don’t remain so simple.

Most everything that happens in the film is pure cinematic spectacle without any basis in reality. There’s death defying plunges, fights, convenient timing and technological know-how that are all entirely unbelievable.

Johnson is perfect in these kinds of films. He seems to embrace the absurdity and run with it to success, bringing the audience happily along.

Unfortunately, it doesn’t quite work that way in “Skyscraper.”

“Skyscraper” tries too hard to be serious. It doesn’t have the same light-hearted feel of other films starring Johnson, like “Jumanji: Welcome to the Jungle” or “Rampage,” which went for comedic, over-the-top action.

There are some funny moments for Johnson but for most of the film he’s alone in a burning building trying to save his family, which cuts down on the banter. However, he plays his father role well and interactions with kids and wife feel authentic. It’s very clear to the audience he will do anything to protect them.

While “Skyscraper” has a lot of action, none of it feels real and it’s pretty predictable. There are some brief thrilling moments, but without the star of the film cracking jokes and villains’ skulls, it feels mostly dull.