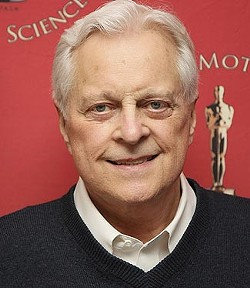 Robert Osborne grew up in Colfax and became the official biographer of the Oscar award.

Sitting in the shadows of a movie theater, Robert Osborne was like many boys in the 1940s. The magic of film transported him out of his small rural town of Colfax, Wash.

What makes Osborne different from thousands of other boys is that he followed its allure, becoming a Hollywood historian on a first-name basis with screen legends.

Osborne’s name is synonymous with classic film for many. After a career writing columns and books about films and stars, he became the Oscar’s official biographer. For the last 20 years Osborne, 81, has hosted the show “Private Screenings” on Turner Classic Movies where he interviews stars and introduces movies. Monday night the show will feature his story in an interview with actor Alec Baldwin (show date and times below).

Osborne finds it “kind of amazing” that someone from Colfax, with no background in theater, can end up in New York City talking about films for a channel reaching 90 million people. He attributes it to, “luck, fortune and other things.”

“I think that can happen,” Osborne says in a phone interview from Manhattan. “Anybody can almost do anything they want to do. No doors are shut in this country to anybody.”

In between trips to Cannes and Hollywood, Osborne returns to Colfax about once a year to visit old friends. The Rose Theater, where he saw his first films, is no longer in operation, but the rest of the town is much the same, he says. When he was in high school his family moved to Everett, Wash., for his father’s teaching job. After graduating from the University of Washington he went to Los Angeles, where Lucille Ball-Arnaz told him Hollywood needed writers more than actors. He went to work for the Hollywood Reporter and later moved to New York. Osborne, who fondly remembers working one summer in a fruit warehouse in Lewiston, talked to Inland 360 about his job and his favorite films. ——— Inland360:    What was it like to be interviewed by Alec Baldwin on your own show? Robert Osborne: “What was so interesting was talking about certain things I did before I got this job at Turner, things I’d pushed into the background. They got a lot of clips from old television shows. I was on a pilot of “The Beverly Hillbillies.” There is Lucy (Ball-Arnaz) on “The Dinah Shore Show” talking about me, that sort of thing I don’t think I’d ever seen before. At the tail end is Bob Wagner, Liza Minnelli (and others) talking about me. That was a big surprise. It was like dying and getting to go to your own memorial. I had to keep checking to see if I was still alive.”

360: Are actors today different from the movie stars during Hollywood’s Golden Era?

RO: “I think most of the actors today, we require different things from them. Actors like Humphrey Bogart and Gregory Peck were bigger than life, more handsome than in real life, more dynamic. ... Now we want them to be exactly like the guy next door. We take beautiful actresses like Charlize Theron and deglamorize them so they’re not so beautiful. Audrey Hepburn, we wanted her to look like no other creature we’d ever seen before. You’re not going to see bigger than life heroes like Errol Flynn anymore.

360: What is your favorite film of all time?

RO: “I have several and it changes because I change. I would say it is a tie three ways between “Sunset Boulevard,” “A Place in the Sun,” with Elizabeth Taylor; and “The Razor’s Edge,” with Gene Tierney.”

When to watch “Private Screenings: Robert Osborne” is scheduled to air at 8 p.m. Monday, Jan. 6, on the Turner Classic Movies channel. Before then, you can watch a promo for the show and you can see Osborne in a video clip for the pilot of  “The Beverly Hillbillies.”