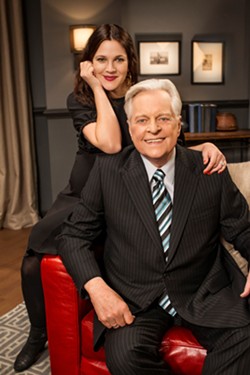 This week Hollywood said goodbye to one of its longtime film historians, Robert Osborne. Film fans know him as the primetime host of “Turner Classic Movies.”

Osborne, 84, fell in love with the silver screen in his hometown of Colfax where he watched movies as a kid in the 1940s at the Rose Theater, which is no longer in existence.

In 2014 Osborne told Inland 360 he found it “kind of amazing” that someone from Colfax, with no background in theater, could end up in New York City talking about films for a channel reaching 90 million people. He attributed it to, “luck, fortune and other things.”

After attending high school in Everett, Wash., and college at the University of Washington, Osborne went to Los Angeles to become an actor. When longtime friend Lucille Ball-Arnaz told him Hollywood needed writers more than actors he changed course. He went on to write for the Hollywood Reporter and was the author of the Motion Picture Academy-sanctioned “50 Years of the Oscar: The Official History of the Academy Awards” in 1978 and 2008’s “80 Years of the Oscar.” He served as the official red carpet greeter for the Academy Awards from 2006-10 and was the host of “Turner Classic Movies” since 1994.

He told 360 that his favorite films of all time were “Sunset Boulevard,” “A Place in the Sun” and “The Razor’s Edge.” You can find the interview in our archives.

The network said Tuesday that the tribute will run all day March 18 and Sunday March 19. Osborne, the longtime face of TCM, died Monday at age 84.

The tribute will feature long-form interviews conducted by Osborne, an interview of Osborne conducted by Alec Baldwin for the host’s 20th anniversary and Osborne’s very first movie intro, filmed for Turner Classic’s first broadcast in 1994, for “Gone With the Wind.”

Some of Osborne’s interviews include sit-downs with Debbie Reynolds, Liza Minelli and Peter O’Toole. On Monday, TCM recalled Osborne as “fundamental in shaping TCM into what it is today.”