The future isn’t plastic: A look to the past offers clues to a future without plastic food packaging 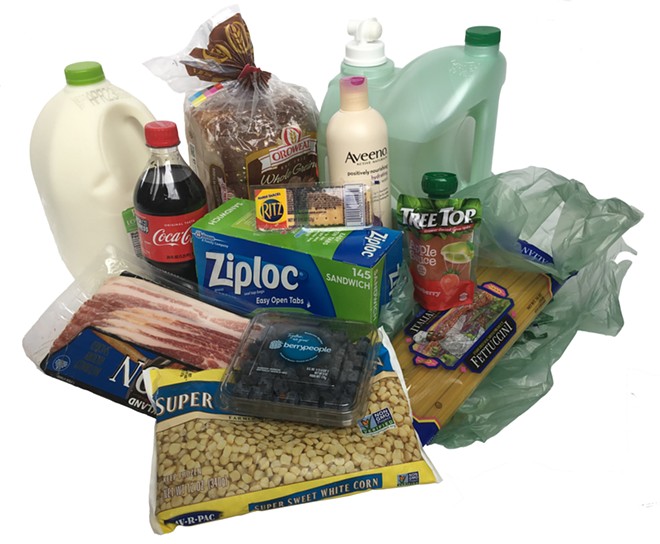 You can reduce your plastic grocery bag use, re-use your old plastic sour cream containers and recycle your plastic beverage bottles, but if you like eating, you’ll have a hard time avoiding plastic entirely.

Food packaging is a significant contributor to plastic waste and much of it -- think string cheese wrappers and raw meat packaging -- can’t be recycled. Being cheap and easily transported, plastic is a foundation of our food system. Even if you stick with non- or minimally processed foods, most of the food available in a grocery store relies on plastic in some way to get to your dinner plate.

It wasn’t always like this. Once upon a time, food was produced and consumed locally. If no one around you had pigs, you weren’t going to have bacon for breakfast. Food began traveling farther and faster with the Industrial Revolution, and it had to be transported in some kind of container. Thus, food packaging was born.

In the early days, packaging was limited to higher-end products. Tins could be expensive, and cardboard and paper didn’t hold up to rain or moisture. In 1898, Nabisco pioneered consumer packaging when they placed their Uneeda brand cracker in waxed paper before putting it in a tray-style cardboard box.

By the 1920s, packaging was more than just a way to preserve the food items. Hisorically, grocers gathered items for customers, but in 1916, the first Piggly Wiggly opened up as the first self-service grocery store. Prices were reduced by having customers shop for themselves. For the first time, customers were making choices, which meant food items had to sell themselves.

Plastics slowly made their way into the grocery store after World War II. It was cheaper and less prone to breakage than glass and, during the 1960s, it became the liquid container of choice. By now, tin and paper-only packaging comprise a small portion of food packaging. A diet limited to foods that had never touched plastic would be quite limited indeed.

Here’s what it was like before plastic ruled the grocery world:

Milk. It was delivered to homes as late as the 1980s in glass bottles that were sterilized and reused.

Soda and other beverages. Soda and beer were among the few beverages available for purchase from a grocery store and were sold in glass bottles. Because these bottles could be returned and exchanged for pocket change, kids would often take them to store and buy candy. No one bought drinking water in a bottle.

Fresh produce. Fresh produce was typically limited to local, seasonal items. Exceptions were shipments of bananas, citrus or other hardy produce that could handle months at sea.

Frozen produce. Non-seasonal fruits and vegetables were available only via a tin or glass jar. In rural areas, many people had rows of home-canned foods in their basements or cellars to take them through the colder months. Single-serving containers would’ve been unimaginable.

Portable food storage. Workers and school kids would pack lunch in a cloth or leather bag, metal pail or lunch box. To minimize drying of the bread, sandwiches would be wrapped in waxed paper or sometimes, a lightly moistened cloth.

Snack foods. Candies, cookies, crackers and other treats were often sold in bulk and dispensed in paper bags. Such items that were produced elsewhere were often considered luxury items and would be sold in tins. Lidded tins were often reused for food storage or other items around the home.

Bread. Those who didn’t make their own, would buy it fresh from a bakery and store it in a bread box at home.

Cleaning products. Home and laundry cleaners were usually in powdered form and sold in cardboard boxes. Anything liquid would be sold in a glass bottle.

Personal hygiene products. Soap was available in bar form and typically sold with paper packaging, if any. Shampoo and other liquid hair care products were available in glass containers.

Pasta and other dry foods. Rice, pasta, dried beans, dried fruit, nuts and other dried foods were available in bulk and and purchased by weight. They’d be placed in a paper bag or a container brought from home.

Carrying it home. Fresh produce was often carried in woven string bags that could get dirty since the food wasn’t washed prior to being sold. Other groceries would be placed in baskets, boxes or cloth bags for the trip home. It was once more common to shop for the items needed for just that day.