The history behind the so-called "War on Christmas" 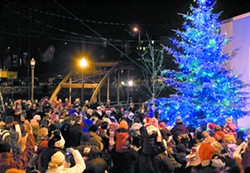 Dean Hare
People gather for the Tree Lighting Ceremony in 2009 at the Pine Street Plaza in Pullman.

More than a month ago, Starbucks ushered in the 2015 holiday season with a plain red paper cup that set off a blizzard of controversy.

The outrage came from people and groups who felt the plain red cups, devoid of any traditional holiday symbols, were yet another attack in the so-called war on Christmas, a cultural battle where the “real” reason for the holiday, Christianity, is getting a massive whitewash. People promoting this war argue about calling decorated evergreens Christmas trees or holiday trees or whether someone is being insulting by saying “Happy Holidays” or sending “Seasons Greetings” instead of “Merry Christmas.”

Why all this bickering at a time meant to celebrate peace? It turns out that’s a more recent idea about the holiday, which has been shaking up controversy for centuries. Here’s a look at its real history.

Centuries before Jesus was born, early Europeans celebrated during the darkest days of the year at the winter solstice, Dec. 21 to 23, depending on the year. Feasting was common. It was a good time to slaughter animals so as to not feed them through the winter. Many pagans believed in spirits who traveled the sky in the winter, the beginnings of the legend of Santa Claus. They decorated their homes with green fir branches with thoughts of the spring to come. Scandinavian vikings thought evergreens were a special plant of the god Baldur, because they could withstand the assault of winter.

At winter solstice, Romans celebrated dies solis invicti nati, “day of the birth of the unconquered sun.” Festivities included Saturnalia, which focused on goodwill, gifts and generosity to the poor. Slaves were treated as equals and wore their masters' clothes. Executions were canceled and there were public feasts. They also celebrated Juvenalia, a feast honoring Rome’s children. It was one of the most popular times of the year.

The Gospels do not record the birth of Christ. For centuries church officials eschewed the pagan custom of celebrating birthdays, believing saints and martyrs should be honored on the days of their death. In the fourth century, Pope Julius 1 chose Dec. 25 as the “Mass on Christ’s day.” Christian meaning was added to existing festivals.

By the Middle Ages, Christianity had mostly replaced pagan religions. People attended church on Christmas and then celebrated with much drinking and partying. A person was appointed as the Lord of Misrule to manage Christmas festivities.

In 17th century England, Puritans contended there was no scriptural reason for the celebration of Jesus’ birth and that the holiday only continued pagan celebrations. After the English Revolution, they banned Christmas in England in 1647. Merriment was forbidden, shops were ordered to stay open and ministers were arrested for preaching on Christmas Day. They took those beliefs with them to North America, refusing to note the holiday, which wasn’t recognized by the U.S. federal government until 1870.

Charles Dickens’ most popular book, “A Christmas Carol,” released during the 1843 holiday season, widely spread themes of family, charity, goodwill, peace and happiness that came to define a Victorian Christmas.

England’s Queen Victoria is credited with spreading the popularity of the Christmas tree, a tradition introduced to her by her German-born husband, Prince Albert. An 1848 illustration showed the family celebrating around a decorated tree and the idea quickly spread.