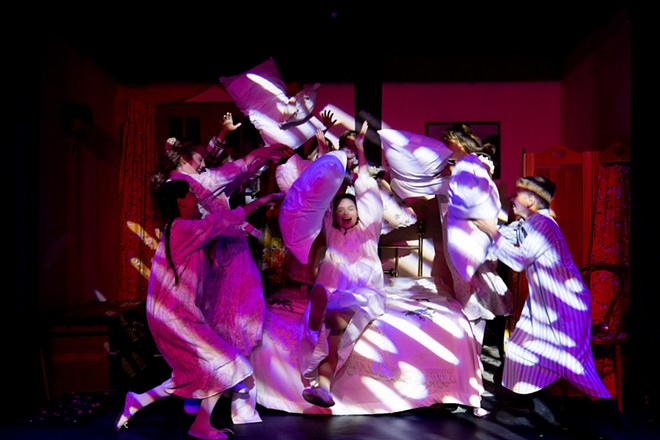 Zach Wilkinson/Inland 360
Cast members rehearse a scene from their musical, “The Sound of Music,” Monday. It opens tonight at the Regional Theatre Of the Palouse in Pullman.

The Regional Theatre of the Palouse is kicking off a season of classic Broadway musicals with a production of Rodgers and Hammerstein's “The Sound of Music,” which debuts tonight at the Pullman theater.

The production will feature out-of-the-area actors, including New York performers Liv Kurtz (as Maria Rainer) and Kierlan Denninger (as Liesl) and, from Los Angeles, Beverly Craine (Mother Abbess), Alrielle Joy (Elsa Schraeder) and Craig Sherman (Max Detweiler). There also will be homegrown performers, such as Michael Keene, of the Lewiston-Clarkston Valley, as Captain Von Trapp, Garrett McClure, of Moscow, as Rolf, and a double cast of local children playing the Von Trapp children.


Director Michael Todd said most viewers will likely be familiar with the 1965 film starring Julie Andrews, but the stage production “has unique structural differences audiences will enjoy.”

“For example Maria and Mother Abbess sing ‘My Favorite Things’ in the abby and ‘The Lonely Goatherd’ is used to comfort and entertain the children during a lightning storm,” Todd said. “RTOP pulled all the stops to feature iconic songs from the film, including ‘I Have Confidence’ and ‘Something Good.’ ”


Inspired by the memoir of Maria Augusta Trapp, the play follows Maria, who brings music and joy to the home of Von Trapp, a widowed naval captain with seven children. But as the forces of Nazism take hold of Austria, Maria and the entire Von Trapp family must make a moral decision.

“There is an uplifting message of hope and resilience packaged in Rodgers and Hammerstein's inspirational work and orchestration,” Todd said. “Classics truly become classics for a reason and this show is a must-see for longtime and first-time viewers alike.”


The RTOP also is planning productions of “Guys and Dolls,” “Plaza Suite” and “South Pacific” this season.