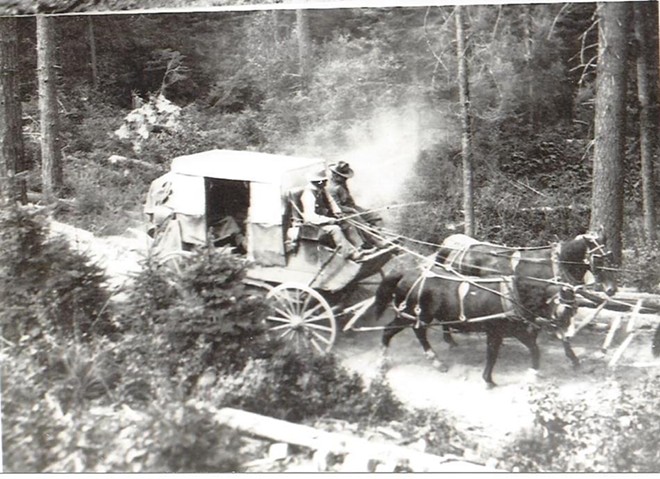 CLEARWATER -- If you’ve ever wanted to time travel there’s a chance Sunday, July 16, to visit the late 1800s on the annual Clearwater to Elk City Wagon Road Adventure Trip.

Participants will drive one of Idaho’s earliest roads over the Clearwater Mountains, retracing the path fortune seekers took to the gold fields that lured thousands here during Idaho’s first gold rush. There are 10 stops along the route at way stations used a century ago. At each one descendants of pioneers who settled the area share a bit of history, tales like how the snow was so high at the Mountain House way station that horses had to wear snowshoes and tunnels were dug so people could enter the hotel on the second floor.

If you’re ready for an adventure, and a long Sunday drive back in time, here’s what you need to know.

A stagecoach and horses are not necessary, but you do need a vehicle that can navigate a rutted, narrow and steep primitive road. It must have high clearance. No RVs or oversize vehicles are allowed on the tour because of sharp switchbacks.

Bring a picnic lunch, plenty of drinking water and snacks. While the way stations where travelers sought respite once had busy saloons, hotels and stables, nothing is left now but stories. Bring a camera to capture some memories and money if you want to buy a souvenir T-shirt or history books.

The trip begins Sunday in Clearwater, a tiny community located off State Highway 13 between Kooskia and Grangeville. If you want to start with a full belly, the Clearwater Grange Breakfast starts at 6:30 a.m. Gather in front of the old Clearwater store for an 8:15 a.m. Saturday departure. The tour covers 53 miles and the recommended speed is 10 to 15 mph. The group is anticipated to arrive in Elk City around 4:30 p.m.

The Elk City Wagon Road was completed on July 15, 1895. Since 1991, the tour has marked the anniversary. The road was built to accommodate the heavy machinery needed for hard rock mining, explains Dana Lohrey, a tour organizer and a descendant of a Clearwater family that grew produce to feed the prospectors. Before the road was built, people used the South Nez Perce Trail, an ancient route the Nez Perce used to access eastern lands. The road crosses the trail in several places. Public subscription was used to pay for the road’s completion, Lohrey said. While there were no federal dollars contributed, the mail-order businesses Montgomery Ward and Sears each made a $25 donation.