Two cautionary tales of close encounters with the rattling kind 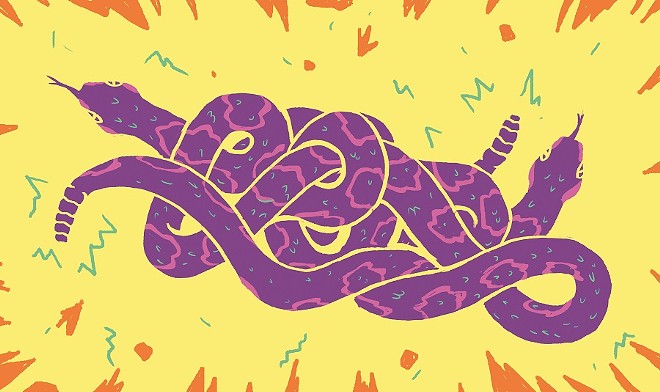 Good news for people who fear snakes in the Pacific Northwest: There is only one venomous snake in the wild to fear, and it’s not one of the most poisonous in the world.

The rattlesnake’s distinguishing characteristics are its rattling tail and its diamond-shaped head. They are the largest venomous viper in the U.S., and there are several species. While bites are rarely fatal, they can cause significant physical and mental trauma.

In this week’s Inland 360, people share their rattlesnake tales, and we bust the myths about what to do, or not do, if you are bitten.

Jordyn Edwards: “He Never Warned Me.”

Jordyn Edwards didn’t plan to break any records the day she went fishing on the Grande Ronde River. Nor did she plan to get bit by a rattlesnake.

Jordyn and her now-husband Chad were fishing along the banks in the Shoemaker Grade area with their dog about five years ago. Her feet were in the water when she slipped and fell. Chad went to help her up and she saw she had fallen on a snake.
“It was just a little baby rattlesnake,” said Jordyn, 28. “I initially didn’t even feel anything.”

Afterward, they noticed the fang marks on her ankle. She’d been bit three times in quick succession.

“He never warned me; he never rattled. It felt kind of like a bee sting,” Jordyn said.

She and Chad, both intensive care unit nurses at St. Joseph Regional Medical Center in Lewiston, loaded up and headed for the hospital. Within 10 to 15 minutes she began to show signs of anaphylactic shock, she said.

There was numbness and tingling up her leg. She became extremely nauseated and began dry heaving. There was a horrible metallic taste in her mouth. Her breathing was labored, and her vision blurred and became spotty. All are symptoms of envenomation, exposure to a toxin as the result of a bite or sting.

She started sliding in and out of consciousness, but she saw Chad reach into the center console for a pen and knife. He thought he might have to perform a tracheotomy on her.

“You are not going to trach me in the middle of your dirty pickup,” Jordyn told him.

They still joke about that today. What was to come wasn’t as funny.

At the hospital doctors administered the anti-venom CroFab, which costs thousands of dollars per vial. Usually people need one or two doses, Jordyn said. She spent a couple of days in intensive care before going home. 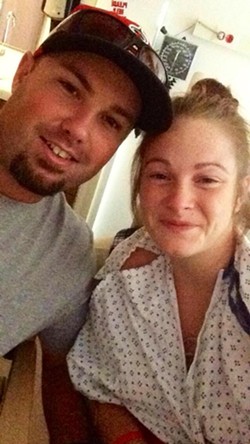 Chad and Jordyn Edwards in the hospital after she was bitten by a rattlesnake.

After her first night at home, she woke up with a giant hematoma from her hip to her ankle. She returned to the hospital where tests showed her blood platelet levels were extremely low. Platelets are blood cells that help the body form clots. They can be affected by snake venom. She spent another week in the hospital getting doses of CroFab. Her platelets did not improve. They sent her home, and she continued to receive CroFab as an outpatient, along with the steroid prednisone. After a time, she slowly returned to normal.

In the end, she set a record for receiving 34 vials of anti-venom, she said. Before that, medical records indicated the most administered was 18.

There was no permanent physical damage, but mental effects of the experience remain. She grew up hunting, fishing and camping but has developed an intense feeling about snakes.

“I can’t even see a little garter snake without getting weird,” she said.

But that doesn’t stop her from enjoying the outdoors. The best way to prevent a snake bite is to wear long pants and sturdy boots. She wears bright pink rubber boots in the wild.

I don’t even care if I look ridiculous, she said.

Byron Edelman: “I never did see the snake.”

It was early evening in late August 2016, and Byron Edelman was jogging along the trails beyond the campground at Hells Gate State Park outside Lewiston when he felt a sting on the inside of his lower left ankle.

“I thought it was a bee sting,” Edelman said.

He looked down at his sock and saw blood. Upon further investigation, he found a single puncture wound.

He wondered if it was a snake bite but, “I never did see a snake.”

Edelman works as a sports reporter at the Lewiston Tribune and recalled an article that ran earlier that summer that said to go to the emergency room if a snake bite is suspected. Within the hour he was at one of the Lewiston-Clarkston Valley’s two hospitals. His ankle felt “tingly,” was swelling and he had a metallic taste in his mouth. The medical staff diagnosed it as a spider bite and sent him home around 10:30 p.m.

“I could hardly walk at that point,” Edelman said. “They told me to raise my leg and ice it, two things you shouldn’t do with a snake bite.”

He tried to sleep, but the pain was unbearable. He crawled and dragged himself around his house to avoid using his leg. Early the next morning, he drove himself back to the hospital. They gave him crutches and told him to keep an eye on the wound. They determined it was not a snake bite because it was not changing color, he said.

Edelman called a trusted authority, his mother, a librarian who looked up symptoms of a snake bite and told him to go to a different hospital. A neighbor drove him, and he was delivered to the emergency room in a wheelchair. After one look, the doctor told him the only thing that could cause that much swelling was a snake bite. He was given morphine and anti-venom and was hospitalized for a couple of days. It was nearly a month before he could walk without crutches.

For Edelman the moral of the story is: If you think you’ve been bitten by a snake but aren’t sure, request a blood test which can show the presence of venom through its effect on blood coagulation.

“It can be hard to eyeball it,” Edelman said. “I guess I was too nice.”

After he recovered, he returned to the first hospital to inform them of their misdiagnosis. He said they used it as a teaching experience for their staff going forward.

He’s more careful when he’s in rattlesnake territory now. He watches where he steps, doesn’t wear earbuds and tries to use all his senses to be aware of his surroundings. He doesn’t hold bad feelings toward snakes and doesn’t think others should either.

“It’s weird to defend snakes, but so many people think they’re out to get you. They’re not.”