When art and science collide 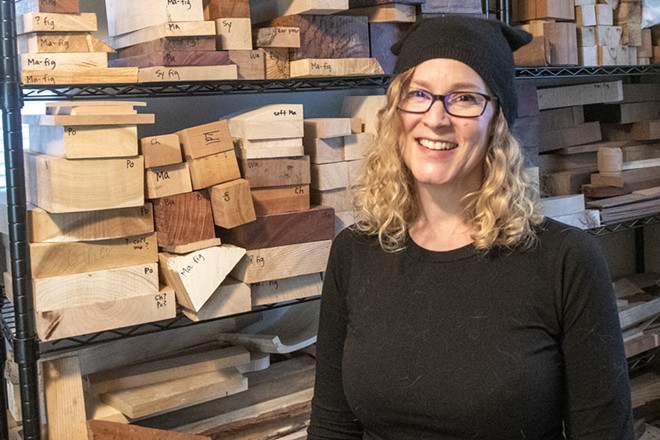 Zach Wilkinson
Former scientist turned artist Kristin LeVier, of Moscow, poses for a picture in front of a storage of her artwork materials consisting of mostly wood and cardboard. “Cardboard boxes are like gold to woodworkers,” said LeVier.

Kristin LeVier, like many of us, is spending a lot of time at home these days. She has two young children trapped in the house doing schoolwork. She has a lot of free time to teach herself new hobbies, like fabric design.

It’s strange to her to think that, 15 years ago, she could have been leading the charge against the novel coronavirus.

In a past life, the Moscow-based artist was a molecular biologist, rubbing elbows with Dr. Anthony Fauci as part of her senior position at the pharmaceutical company Pfizer. But LeVier had never shaken the passion for art and creativity she’d felt as a child. 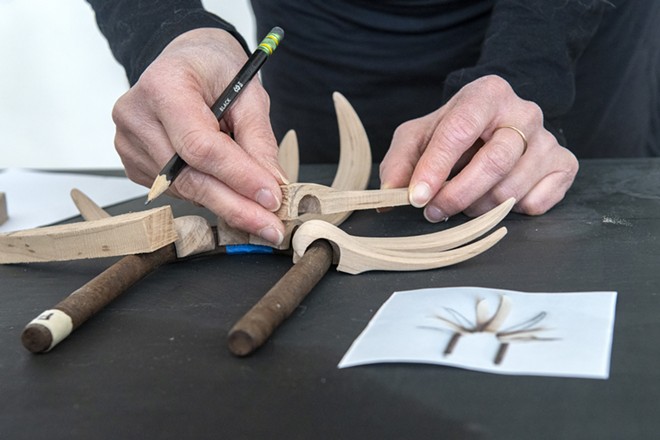 Zach Wilkinson
Artist Kristin LeVier works on a project using rusty pieces of metal and wood that she gathered near her remote cabin in Idaho near the Frank Church-River of No Return Wilderness.

Even when her high-stakes work developing antibacterial drugs occupied most of her mental real estate, she found time for creative pursuits in rare moments of rest. As a broke college student with a desire for beautiful furniture and no budget, LeVier picked up woodworking and began to make her own.

“If I’m not making something, I just don’t feel balanced or happy,” LeVier, 52, said. “I had these twin, dueling passions, but people always tell you to pick one side or the other.”

But LeVier doesn’t think those dueling passions have to be separate. Though she’s traded in her lab coat for safety goggles and a lathe, she creates work that lives at the intersection of art and science. She believes the two realms overlap more frequently than we think.

When her husband took a position at the University of Idaho in 2005, LeVier moved from Michigan to the Palouse. With that drastic life change, she became a full-time artist, sculpting organic elements like sprouts and tentacles from wood. Her work has been exhibited at countless galleries across the nation and world.

Last month, LeVier won the 2020 Bob Stocksdale International Excellence in Wood Award, an honor presented annually by the Center for Art in Wood to an artist whose work embodies the craftsmanship and reverence for wood upheld by its namesake, a renowned woodturner known for creating bowls from rare and exotic woods.

Zach Wilkinson
Artist Kristin LeVier is seen working on her most recent project through a window in her basement on a snowy day in Moscow. LeVier said that this was her first work studio with a window and natural lighting.

Adopting wood as her primary artistic medium was an easy choice for LeVier. She’s always been drawn to its natural warmth and, as a scientist, she can appreciate the unseen depths of beauty and complexity hidden in each grain and ring of the wood she uses.

“Part of the reason I’m drawn to it is that each piece of wood was once this living thing,” LeVier said. “And because of that, I think it truly makes for beautiful art, but I also want to respect the wood with whatever I make from it.”

Zach Wilkinson
Kristin LeVier uses a dowel to place a green-painted piece of wood that was bent and carved to resemble a leaf into her most recent collaborative art project. LeVier said that the leaves are a symbol of regrowth and healing.

Her work frequently grows out of oft-overlooked beauty, featuring natural elements like plants or bacteria. LeVier hopes her work invites people to consider the natural world more closely. She wants to highlight how nature intersects constantly with art and human impulse — things often seen as directly opposed to science.

That overlap can be seen in a recurring motif throughout her work, in which she wraps delicate, fingerlike leaves around a central sturdy object. To LeVier it symbolizes very human, abstract concepts — protection, maternal instinct and the gentle-yet-fierce equilibrium of Earth.

“It’s the idea of just taking something that was manmade and wrapping it in a symbol of nature-based healing and renewal,” she said. “That's what I'm feeling really strongly compelled to do right now. And, if I ever get back in the studio more regularly, that's what I'm going to be working on.”

The exhibitions and speaking engagements LeVier normally attends each year have all been canceled because of the pandemic, and she gets to the studio less often as she stays at home with her two children.

But LeVier has been amazed at the accidental cooperation between art and science during the pandemic — high-brow scientific concepts, like the disease vectors and animal models she worked with two decades ago, are in the news frequently now, with scientists and doctors taking center stage in a way that’s never been seen before in pop culture. In LeVier’s mind, it takes artists of all kinds to bring that information to consumers through infographics, news segments or web design. It reaffirmed to her the potential for the two fields to solidify a long-term partnership.

There are many examples where art has directly benefited science or vice versa. Medical illustration, for example, cuts through the complexity of the human heart and allows medical students to peer directly into the chambers that matter, LeVier said. She highlighted the work of several contemporary artists whose work utilizes or features science in a 2019 TEDx talk, available on her website. She said she believes the world is on the cusp of finding bigger, better ways to integrate the two fields.

“I don’t think we know yet how to do it, though, because it’s almost like they speak different languages,” she said. “But I think we’re on the early edges of seeing how artists see the world differently and putting that to use.”

That isn’t to say there isn’t a place for the “wishy-washy, dreamy kind of things” typically associated with the arts, LeVier said. While locked down at home, she has read countless books and virtually attended performances she could never have experienced otherwise. LeVier thinks greater access to the arts can help people find things that enrich their lives in unexpected ways.

“Maybe they're tired of watching stupid sitcoms on Netflix,” she said. “And so they start to attend every virtual opening at the Guggenheim in New York City, and it sort of adds a new cultural element to their life that just, logistically, they couldn't have before.”

Zach Wilkinson
A table displays a collection of rusty materials and wood that Kristin LeVier has gathered around her remote cabin in Idaho near the Frank Church-River of No Return Wilderness.

During the pandemic, LeVier has considered how to bring more science into her art in an impressionistic way.

Specifically, she wants to bring to life the drug that has kept her mother alive 13 years after a heart transplant. The life-saving chemical compound deserves to be seen as a work of art, she thinks. But the drug’s molecular structure is simply not a thing of beauty, at first glance. LeVier has been wondering how to depict it with the sense of wonder and love it carries for her.

“For me, science is so beautiful,” she said. “And all I want is to honor it in some way, to show it that way to others too.”