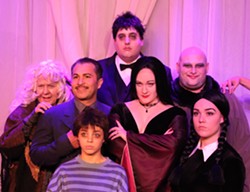 Just in time for the Halloween weekend, “The Addams Family: A Broadway Musical Comedy” opens tonight at the Regional Theatre of the Palouse in Pullman.

The kooky Addams family, popularized through film and television, comes to life on the stage in a Broadway musical based on the characters in Charles Addams’ original cartoon. Ghoulish and macabre as the Addams family may be, director John Rich describes the family-friendly show as “new, up-beat, crazy -- a feel-good musical.”

It’s a dark and stormy night at the Addams family mansion when the show opens. A frightening reality has beset Morticia (Bethany Hanes, Moscow) and her devoted husband Gomez (Hector Aguilar-Cerreno, Pullman). Their now-grown daughter, Wednesday (Olivia Kennedy, Moscow), has fallen in love. Even more troubling, Lucas (Michael Todd, Pullman), the object of her affections, seems to be a normal boy from a normal family. When the whole Addams family - including Pugsley (Berit Preece, Pullman), Grandma (Cathy-Jo Zeller, Lewiston), Uncle Fester (Evan Englander, Pullman) and Lurch (Andrew Beck, Pullman) - attempts to have one “normal dinner” for Lucas and his parents, chaos ensues and multiple relationships are threatened.

“For us that watched the TV series and films over the years, it brings back fond memories of an eccentric family that enjoyed life to its fullest,” Rich said.

Alongside the familiar characters, comedic episodes and witty lines is a fresh musical score that Rich believes audiences of all ages will enjoy -- and may even find themselves humming at the show’s end.

WHAT: “The Addams Family: A Broadway Musical Comedy”

WHERE: Regional Theatre of the Palouse, 122 N. Grand Ave., Pullman