‘Alien: Covenant’ is a movie at odds with itself 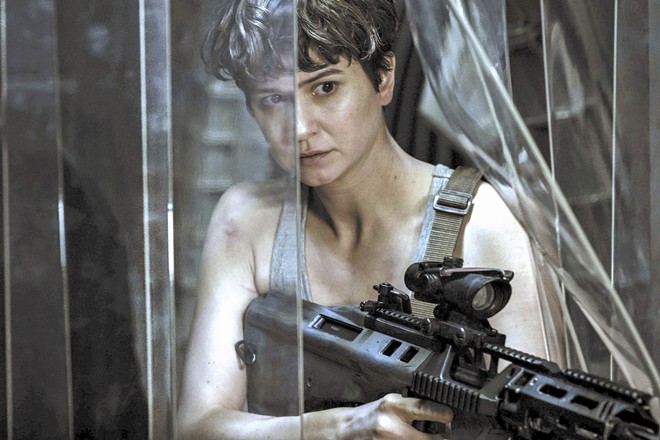 When the first “Alien” came out in 1979, promising and delivering screams in space that no one could hear, more than a few critics and regular humans called it a relentless, hard-driving thrill machine. In retrospect, it resembles a movie with the patience of Job — taking its sweet, stealthy time before arriving at one of the great moments in the history of extreme cinematic gore.

You know the scene, probably. There’s John Hurt, an actor whose face always seemed halfway to crestfallen even when he didn’t have anything to worry about, sitting around the spacecraft galley, having a jolly meal with his crew aboard the Nostromo. He doesn’t realize the steroidal tapeworm inside him, gestating, awaits the right moment to burst forth from Hurt’s chest and commence the cat-and-mouse franchise spanning two centuries and counting.

That monster has been chasing director Ridley Scott ever since. Five years ago, Scott returned to the franchise he started and then turned over to others with an ambitious, messy, stimulating prequel, “Prometheus,” in which he went easy on the aliens and heavy on the origin-story mythology. Fans of the earlier “Alien” movies couldn’t entirely embrace it. In recent interviews Scott acknowledged the folly of his initial disinterest in dealing at all with aliens, aka xenomorphs, in the prequels.

But fan blowback and his producer’s instincts carried the day. The new movie, “Alien: Covenant,” features Michael Fassbender times two and Katherine Waterston under coolly controlled duress. It’s the third Scott-helmed “Alien” picture; the sixth movie overall, not counting the “Alien vs. Predator” spinoffs; and the second movie, following “Prometheus,” to betray considerable confusion and ambivalence about what sort of “Alien”-adjacent story Scott has in mind, by way of screenwriters John Logan and Dante Harper.

It’s a maddeningly uneven picture, with an action climax staged and executed with the air of a contractual agreement. But as with “Prometheus,” the most elegantly wrought sequences make up for the monster stuff plainly less interesting to Scott.

A sleek, austere prologue finds weaselly Peter Weyland (Guy Pearce) enjoying his Mahler and activating his latest android (Fassbender), whom he names David, after the statue. The robo-lad’s head is filled with dreams of alien life forms and the glories of space exploration. Then, the movie proper: We’re aboard the Covenant, with a new, hapless crew of mortals. The year is 2104. This is a colonists’ ship, like the Mayflower, only with embryos and sleep-frozen humans.

Fassbender also plays android Walter, the latest-generation robot assisting the humans. Early on, the spacecraft is hit by a neutrino shock wave, which takes the life of the captain (James Franco, in a hilariously brief cameo) and leaving the Covenant under the command of Capt. Oram (Billy Crudup, valiantly enlivening a role defined by insecurity).

The real star, though, is Waterston, the crew’s so-called terraforming expert and executive officer. She’s the can-do female lead evoking memories of Sigourney Weaver’s Ripley. The crew is headed to a faraway planet, but a mysterious radio transmission is too tantalizing to pass up. So it’s off to the planet where Prometheus met its doom, and where alien spores make their unseen way into the ear canals and nostrils of the crew members voted least likely to succeed.

Fassbender differentiates his dueling androids in subtle physical ways and more pronounced vocal ones. (David sounds like HAL from “2001: A Space Odyssey”; Walter speaks like someone trying to imitate Heath Ledger’s Chicago-inflected Joker in “The Dark Knight.”) The auxiliary crew members are played by, among others, Danny McBride, Carmen Ejogo, Demian Bechir and Amy Seimetz. The script makes them moderately interesting alien fodder or, for the fortunate ones, alien vanquishers.

Around the midpoint, “Alien: Convenant” takes a turn toward a “Planet of Dr. Moreau” storyline, stealing from H.G. Wells. Mostly, of course, the film steals from earlier “Alien” movies. Scott’s armful attempt to marry rousing bits from James Cameron’s “Aliens” (the “fun” one) with the brooding tone favored by Scott and David Fincher (“Alien 3”) has led to a product divided against itself. And yet I was consistently taken with Fassbender’s work, and with Waterston. I may be as conflicted about “Alien: Covenant” as Ridley Scott apparently was. But I’ll take it over “King Arthur.”

Phillips writes for the Chicago Tribune.