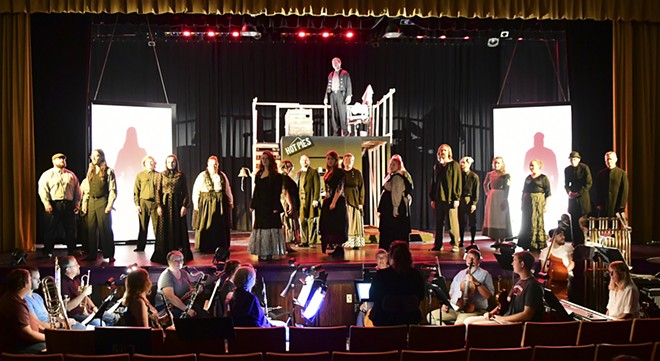 Clarkston’s Conner Wayne Brown jumped from actor to director at the Lewiston Civic Theatre last year in the production “Wait Until Dark.” This fall, Brown has taken on one of the darkest musicals ever written, “Sweeney Todd: A Musical Thriller,” opening Thursday at Lewiston High School.

In the unsettling tale, a Victorian-era barber returns to London for revenge against the corrupt judge who ruined his life. When it eludes him, he swears vengeance on the entire human race, murdering as many people as possible while his associate, Mrs. Lovett, bakes the bodies into meat pies to sell to the unsuspecting public. The music has been called one of composer Stephen Sondheim’s most perfect scores.

“This show is definitely a hard, bloody — woo boy a lot of blood — PG-13. Leave the small children at home before coming to this one,” said Brown, who works as a preschool teacher at Holy Family in Clarkston and is a drama coach at Sacajawea Junior High School in Lewiston.

In an email interview, Brown took Inland 360 behind the scenes of the production.

Why did you want to be involved in this production?

So, “Sweeney Todd” was a gigantic influence on me growing up as a theater kid in the suburbs of Portland (Ore.). I listened to the original Broadway cast constantly. It was one of the first shows I swore to direct someday when I decided directing was my thing (that was about my junior year of high school; I was 17). The fact that I have this wonderful opportunity with this incredible cast and crew so early in my life and career is nothing short of flabbergasting. Every day I walk out of rehearsal pinching myself. It's been a dream come true.

What is going to surprise people about this show?

One thing I love about theater is how fleeting it is. I told the cast, even if you do “Sweeney Todd” 100 more times, it'll never be the same as the way we're doing it right now. And that's awesome. There's been a buzz in our cast and crew since we started; we can feel this show is going to be unique and memorable. What we have here is special, and we can't wait to share it.

What’s challenging about bringing this script to life?

Despite being my all-time favorite composer, Steven Sondheim is not kind to actors, directors and choreographers. His music is notoriously difficult, so tackling that has been a fun challenge.

Also, the script itself is filled with a mix of bizarre humor and extremely dark, serious themes.There's a scene that deals (somewhat vaguely) with sexual assault and so, to prepare ourselves on how best to present and deal with a sensitive, gut-wrenching topic, I asked a professor at Lewis-Clark State College who specializes in women's studies to come speak to the cast. So, we tried to be as educated and careful as we can with everything that crosses the stage.

If you could do any show, what show would you do next?

Honestly, and I know this sounds cheesy, but I'm still enamored with “Sweeney.” Until this beast of a show we're building opens, it's going to be difficult for me to think about anything else.

If someone was going to make your life into a movie, who would play you?

Oh, make it about my awkward tween years and cast the kid from “Stranger Things,” Finn Wolfhard. Lots of funny, cringy material there, I'd bet.

WHAT: “Sweeney Todd: A Musical Thriller.”