Be our guest: “Beauty and the Beast” includes a sensory-friendly production 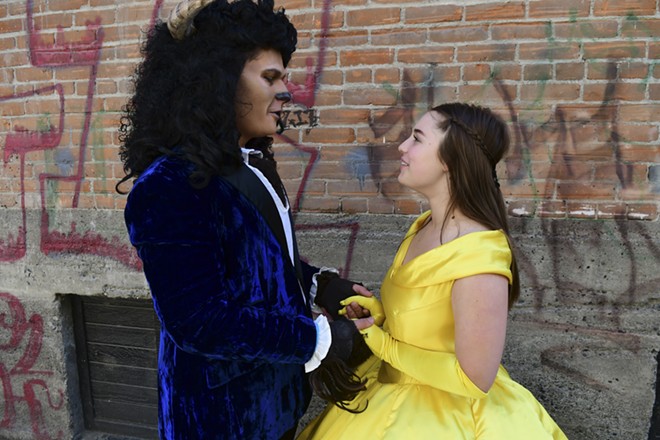 Tribune/Barry Kough
Derek Renzelman is the Beast and Sydnee Jo Swift is Belle in the Lewiston Civic Theater production of Disney's Beauty and the Beast.

With chatty candlesticks and dancing dishes, the Disney musical “Beauty and the Beast,” opens today in Lewiston, with a special performance available for sensory-sensitive audiences.

Based on the Disney animated feature, the show tells the story of Belle, a young girl from a small village, and the Beast, a prince held under the spell of an enchantress. In showing the Beast how to love, Belle brings hope that the spell will be broken.

In addition to its regular evening and matinee shows, the Lewiston Civic Theatre will offer a sensory-friendly version Wednesday. The production is designed for those who have sensory issues, including those on the autism spectrum, said Nancy McIntosh, executive director.

The show will begin at 6:30 p.m. and will be half as long as a regular production, McIntosh explained, featuring only scenes and songs that move the storyline along. The house lights will stay on, and the audience will be allowed to move around the room as needed. The orchestra also will play more quietly.

The sensory-friendly production also aims to minimize any scenes that might scare some audience members. Both Belle and the Beast will be introduced at the beginning of the play, explaining that they’re real people who are acting. Volunteers with glow sticks will be standing in the front of the room, off-stage, to indicate when something potentially frightening is about to take place — for example, when Gaston attacks the Beast. At the end, the characters will come out again and show that they are all fine, despite any distress portrayed in the show.

This is the theater’s first known attempt to offer a sensory-friendly production of a regular-season show. Though they’ve not received requests for this type of production, McIntosh said, it’s something she considered based on families involved with the theater whose members have special needs. She was advised on the production changes by individuals at the Missoula Children’s Theatre.

All tickets for the sensory production will be $10 per person and sold at the door. Proceeds will go to the Green Apple Project, an organization that brings autism support, awareness and education to the Lewiston-Clarkston Valley and surrounding areas.

WHAT: “Beauty and the Beast” Disney musical

OF NOTE: A sensory-friendly production of “Beauty and the Beast” will be offered at 6:30 p.m. Wednesday at the Lewiston High School auditorium; tickets are $10 and available at the door.