Randy Emerson has been building sets for Regional Theatre of the Palouse since they became, well, Regional Theatre of the Palouse. An artist, photographer and contractor, Emerson joined RTOP for their first production, “Wizard of Oz,” in 2007. Almost seven years later, he’s stuck around, and volunteered more than 30 hours each week for their most recent production, “Barefoot in the Park.” Here, Emerson talks about his favorite sets, and the challenges behind making a small stage look large.

Geoff Crimmins
Geoff Crimmons/Daily News
Randy Emerson works on the set for "Barefoot in the Park" at the Regional Theatre of the Palouse in Pullman on Thursday.

How do you get into set design? I’m an artist. I’ve been doing that since I got into college. I’m also a contractor. Out of college, I worked for Disney MGM. I was building sets, certainly on and behind the stage, too. I’ve just been an avid theatergoer since I was a kid. I was lucky. I just kind of fell into this ... I was always one of those guys that would make different stuff out of stuff, kind of the MacGyver.

How did set design compare from Disney to RTOP? Disney is like "What do you need? How much time do you need? How much money do you want to do a project?" Here it’s like, these two walls here have been getting chopped and cut down for six years. That wall there was from the “Wizard of Oz” that we did up at Beasley years ago. It’s a challenge. This is not the easiest space to work with. All stages have limitations. This one, it’s just its physical dimensions. It’s 22 feet wide ... Big theaters with big budgets approach it different. They have big, fat stages. You really have to be specifically thinking about the shape of this theater.

Tell me about the set design for “Barefoot in the Park.” This is a 1963 Brownstone apartment in New York City. It’s old. They live on the fifth floor, so that’s an issue. It’s not well maintained. They have a tiny little bedroom that they refer to as a closet they turned into a bedroom. And a bathroom that is tiny, too ... This is a straight play. We do three musicals a year and then one play. ... Jim Sato, he’s the other guy that helped me with the set. He’s a pro ... For this show, our director RitaRené had a sketch of how she wanted the apartment to look. And then she gave Jim and me free reign to fudge it here and there to make it work. 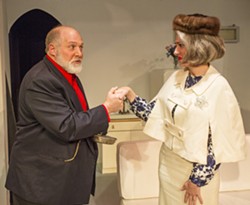 Dean Hare
Dean Hare/Daily News
Victor Velasco, left, played by Randy Emerson, greets Mrs. Banks, played by Jennifer Zambriski, during rehearsal for the Regional Theatre of the Palouse production of Neill Simon's "Barefoot in the Park" on Jan. 30 in Pullman.

Is that how every set is created? We’ve gone at it just about every way imaginable ... This is my first time working with another director other than John (Rich). And I’m acting in this one, too. Sometimes John just gives me a verbal, “I kinda want this, I kinda want that.”

What was the biggest challenge for “Barefoot in the Park”? There’s this whole bit about a big skylight in the roof, so how do you do that? So, we kind of took a little liberty ... We ended up with these two grids that we’ve recycled and used a hundred different ways. We combined them and didn’t like the way it looked, so I cut these new pieces to make it look like one piece. I found this old window, put it up. That was just a visual challenge. There’s a couple bits, a couple gags. It has to be kind of functional, and it has to be in a certain spot.

Where do you get the materials to design? We’re limited by budget. It’s not like we’re a big city civic theater that’s got a million dollar budget, so we recycle a lot of stuff. We’ve got stuff stashed all around town ... Our patrons are very, very good to us. We get donations in money and help, in clothes, in a refrigerator, stove, the couch. The couch and table came from some neighbors of John. Wherever I am, my eye’s always open. I’m always looking for here and for me, personally. I love to go up to the Washington State University surplus, that auction place. As soon as we decide to do “Young Frankenstein,” I’m going to have a field day up there with all the crazy scientific old stuff they’ve got.

What was your favorite set to build? Before we got this building, we used to do shows up at Beasley (Coliseum). Beasley’s a 70-foot-wide and 40-foot-deep stage. I would say for what we did at Beasley, “Wizard of Oz” ... I had to build this big house. It had different rooms in it. It was 360 degrees. It has four sides, it had an interior and an exterior and it was on wheels. It was a heavy, big thing and it opened up like a pop-up book. Its footprint was probably 12-by-12 (feet) closed up. During the tornado scene, we took it from one end of the stage, spun it two times around during the tornado and had to have it end perfectly on the spot and have the feet of the dead witch pop out. That was really cool.

What was your favorite set to build in the current location? In here, probably one of my favorite scenes is when we did “Willy Wonka,” because I got to make some wild stuff. I made this Everlasting Gobstopper Machine, which I had named ELGI, or Everlasting Gobstopper Invention. I had all kinds of stuff: LED lights hooked up in it, smoke and mirrors ... I fall in love with them all. Being an artist I had a hard time with the concept of putting all this time to build something, and then I have to tear it down, take it all apart. I’ve gotten over that. It took a while. You get kind of attached to it.