PULLMAN — David Cay Johnston, an author and Pulitzer Prize-winning journalist, will present a lecture titled “Taxing the Many to Give to the Few: How Government Creates Inequality” at 4 this afternoon at Washington State University here.

Johnston, who won the 2001 Pulitzer Prize for reporting on U.S. corporate tax policy, will give his talk in Room 203 of the Center for Undergraduate Education.

He will focus on issues highlighted in his newest book, “Divided: The Perils of our Growing Inequality,” which examines the economic effects of growing income disparity in the United States.

Johnston has been a distinguished visiting lecturer at Syracuse University since 2009 after retiring in 2008 as a reporter for the New York Times.

The Mardi Gras event includes a silent auction, casino-style games (with play money provided), prizes and dinner for $25 per person. Attendees can skip the 6 p.m. dinner and enjoy the rest of the night from 8 to 11 p.m. for $15.

Proceeds from the event will go to LCSC students participating in a field school in Ecuador in May and June. The proceeds help undergraduate students reduce the individual participation costs of $3,500.

Advance tickets may be purchased by contacting Kerensa Allison, LCSC assistant professor of anthropology, at klallison@lcsc.edu or (208) 792-2348. Tickets for the games and silent auction part of the evening also will be available at the door.

PULLMAN — A brass concert will showcase selections from Broadway’s “West Side Story” and Eastern European music composed by American Eric Ewazen at 8 p.m. Friday in Bryan Hall as part of the Faculty Artist Series at Washington State University here. 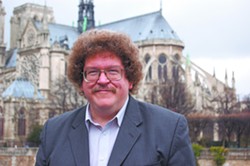 Tickets will be for sale in the lobby 30 minutes before the concert. They are free to WSU students with ID. The cost is $10 general admission and $5 for non-WSU students and those age 60 and older.

The WSU Brass Quintet will play Ewazen’s “Balkanika: Four Scenes from the Balkans.” The four movements celebrate the composer’s love of Eastern European music, dance and food, with inspirations ranging from his father’s Ukrainian dancing to a favorite restaurant in New York City, according to a news release.

Proceeds from the series benefit the School of Music scholarship fund.

Admission is $10. All proceeds will go to the Community Action Food Bank in Lewiston.

Additional parking will be across the street at the Idaho State Veterans Home where a shuttle will pick up concertgoers.

UNIONTOWN — A fundraiser dinner to benefit the Uniontown library relocation and renovation project will be 4 to 7 p.m. Sunday at the New Sage Bakery here.

Friends of the Uniontown Library will assist with the event selling raffle tickets and helping serve the meal, which features spaghetti (both meat and vegetarian), salad, garlic bread and dessert. Cost is $12 for adults, $6 for children and free for those ages 2 and younger.

The library project includes modifying an unused fire station bay into a much larger library while adding a handicapped-accessible restroom.