LEWISTON — People from Lewiston’s past will be celebrated at the annual Walking with Ancestors history tour 9 to 11:30 a.m. Saturday at Normal Hill Cemetery here.

Free tours and presentations will be given by members of the Twin River Genealogy Society and Lewiston historian Steven Branting. People to be featured include: Robert and Rosa Grostein, Abraham and Rachel Binnard, Edward S. Goldner, Charles A. Beach, Milton and Alice Young, David Haner, and Willard and Jeanette Bounds. Registration and information tables will be set up in the cemetery. 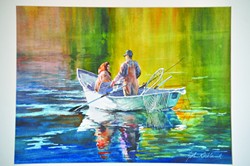 "Clearwater Afternoon" is the name of this painting by John Kirkland.

UNIONTOWN — “Awash in Color” featuring scenes from this region in watercolor and oil by  of Asotin is this month’s exhibit at Artisans at the Dahmen Barn here.

The artist will attend the exhibit’s opening reception from 1 to 3 p.m. Sunday.

Kirkland moved to Asotin from Bountiful, Utah, after retiring in 2004. He operated a sign shop for 20 years, and often incorporates signs into his art work.

The production will be staged Sept. 17 through Oct. 4, and it is directed By Larry Goodwin.

MOSCOW — Tom Bennett will bring his brand of folk blues to the Palouse with a performance Monday at John’s Alley here.

Bennett calls himself a one-man band because he plays resonator guitar, harmonica and foot percussion, all while providing vocals. He was born and raised in rural north Georgia, and now lives near St. George, Utah. His debut album, “The Man Who Shook the Trail of the Devil’s Hounds,” was released on Sweet Salt Records.